According to several Israeli business newspapers (TheMarker, Calcalist) Facebook has acquired Snaptu for an estimated $60 – $70 million, although some reports peg the price lower, at around $40 million.

Update: a Snaptu executive has confirmed the acquisition to our friend Orli Yakuel, but declined to discuss the purchase price or other terms of the deal.

Update 2: and the confirmation is up on Snaptu’s blog. The acquisition is apparently expected to close within a few weeks:

Earlier this year, we announced the launch of a new Facebook mobile application to give people a great mobile experience on a broad range of feature phones. The Facebook for Feature Phones app currently works on more than 2,500 devices.

We soon decided that working as part of the Facebook team offered the best opportunity to keep accelerating the pace of our product development. And joining Facebook means we can make an even bigger impact on the world.

Update 3: and here’s Facebook’s statement on the matter:

As part of our goal to offer people around the world the opportunity to connect and share on mobile devices, we’re excited to confirm that we recently signed an agreement to acquire Snaptu. We expect the acquisition to close in a few weeks, subject to customary closing conditions.

Snaptu is a startup run by a highly innovative collection of engineers and entrepreneurs, who we already work closely with to offer a Facebook mobile application for feature phones.

As part of Facebook, Snaptu’s team and technology will enable us to deliver an even better mobile experience on feature phones more quickly.

Snaptu provides a solution for developing, deploying and maintaining online services, particularly on mobile phones. Just a few months ago, Facebook partnered with the company to launch a rich application specifically for feature phones.

The startup was also just in the news for striking a similar deal with professional social networking service LinkedIn. Other supported services include Twitter, Picasa and more.

Snaptu was founded in 2007 and is based in London, with offices in Tel Aviv and Silicon Valley.

The company raised over $6 million in venture capital funding from Carmel Ventures and Sequoia Capital.

This marks the second international acquisition for Facebook after Malaysia’s Octazen. It marks its fourth purchase this year, after earlier picking up Rel8tion, Pursuit and Beluga.

(Thanks to Roi, Orli and Ayelet for the tips) 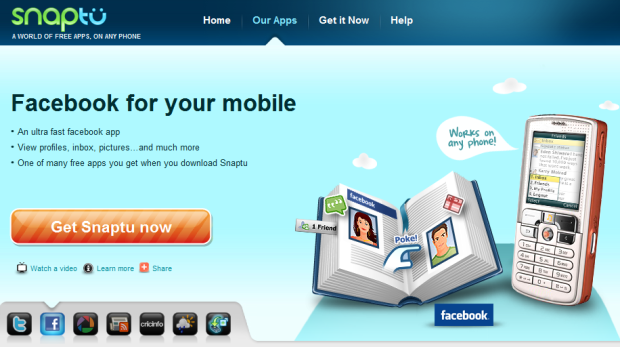