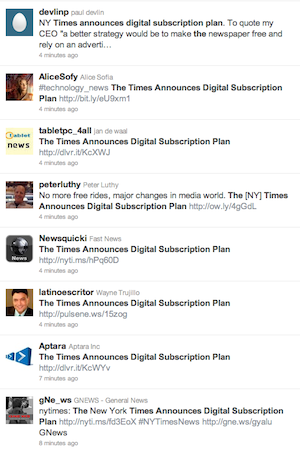 There are a lot of interesting angles to the news this morning about The New York Times’ new paywall. Top news will remain free, a set number of articles for all users will remain free, there will be different pricing tiers for different devices, NYT is fine with giving Apple a 30 percent cut, etc, etc. But to me, the most interesting aspect is only mentioned briefly about halfway down the NYT announcement article: all those who come to the New York Times via Facebook or Twitter will be allowed to read for free. There will be no limit to this.

Up until now, we’ve seen paywall enthusiasts like The Wall Street Journal offer such loopholes. But they’ve done so via Google. It’s a trick that most web-savvy news consumers know. Is a WSJ article behind a paywall? Just Google the title of it. Click on the resulting link and boom, free access to the entire thing. No questions asked. This new NYT model is taking that idea and flipping it.

The Google loophole will still be in play — but only for five articles a day. It’s not clear how they’re going to monitor this (cookies? logins?), but let’s assume for now that somehow they’ll be able to in an effective way. For most readers, the five article limit will likely be more than enough. But that’s not the important thing. What’s interesting is that the NYT appears to be saying two things. First, this action says that spreading virally on social networks like Twitter and Facebook is more important to them than the resulting traffic from Google. And second, this is a strategic bet that they likely believe will result in the most vocal people on the web being less pissed off.

Paywalls are not easy. For proof, look at well, just about every site that has ever tried to implement one. The barrier is always met with huge backlash. But much of that backlash often comes from the savvy readers who had been used to getting at the content for free on the web. NYT seems to be betting here that these users are the same ones that now rely on Twitter and Facebook for their news discovery. And they will be unaffected.

Is that the right bet? Maybe, or maybe not. Facebook has around 600 million users now. Twitter has another 150 million plus. These are mainstream services that extend far beyond the early adopters. But even if this move goes beyond the vocal users and into the mainstream population that might otherwise be willing to pay, at the very least, it will still mean less overall backlash.

And it’s yet another sign of a changing of the guard on the web from Google to Facebook and Twitter. It will arguably be easier to find all the NYT content for free via Twitter search than it was via Google search. At the very least, it will be more obvious. And the social filters of Twitter and Facebook will have people sharing only the best articles that you’re likely going to want to read anyway.

Meanwhile, the other side of the bet is that those coming in from Google are probably more likely to pay if asked nicely every once in a while. You know, the more mainstream and perhaps slightly older and less tech-savvy audience. The people who may actually pay.

The main point? If you’re reading this post, you’re unlikely to be affected by the NYT paywall because you probably came here from Facebook or Twitter — the two key players in the new social loophole.