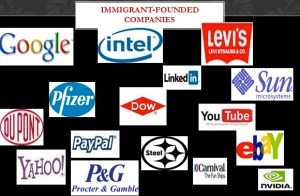 In my last post about the Startup Visa, I was very critical of the Kerry–Lugar legislation. That’s because it required immigrant entrepreneurs to raise at least $250,000 in financing for their startups, of which $100,000 had to come from American VCs or Super Angels. Few startups raise this kind of seed money—even in Silicon Valley. I couldn’t foresee this bill generating more than a few dozen jobs.  Yet our political leaders would have claimed “Mission Accomplished”, and we would have lost a valuable opportunity to stem the brain drain.

I was delighted to receive an e-mail, last week, from Garrett Johnson, who works for Senator Richard Lugar (R-Ind.). Garrett said that the Senator had read my articles and asked his staff to consider my comments. After consulting with Bob Litan, of Kauffman Foundation; Brad Feld, of Foundry Group; Eric Ries, of the lean-startup movement; and other champions of the visa, Garrett had revised the legislation. He sent me a draft of the bill that was introduced today.  This new legislation is even better than I had hoped for. If it gets through both houses—and doesn’t have bureaucratic constraints—I expect it to unleash a flood of entrepreneurship.

The new legislation provides visas to the following groups under certain conditions:

The investor must be a qualified venture capitalist, a “super angel” (U.S. citizen who has made at least two equity investments of at least $50,000 every year for the previous three years), or a qualified government entity.

The really good news is that this enables foreign students and workers who are already in the U.S. to qualify for a visa. The requirements for them are very reasonable—they must show that they have enough in savings not to be a burden to American taxpayers, and get a qualified investor or a government entity such as the Small Business Administration to validate their ideas by making a modest investment.

Yes, there is a risk for holders of this visa that, if their venture fails or doesn’t go anywhere, they must start again or leave the U.S. But that’s entrepreneurship—there are no guarantees. This won’t appeal to everyone, and it is not meant to. The Startup Visa is for risk takers.

This version of the bill will, I expect, encourage tens of thousands of workers trapped in “immigration limbo”, and foreign students who would otherwise return home after graduation, to try their hands at entrepreneurship. Many of these people would not otherwise have considered entrepreneurship; they will now have the incentive to take the risk.

Even though the bill doesn’t allow visa holders to work for any company other than their own, I have no doubt that the anti-immigrants will rally against it. They always do, regardless of what is good for the country and of what is good for them. They fear competition and will make claims that these startups will, somehow, take their jobs away.

But the fact is that skilled immigrants create jobs; and recipients of the startup visa will not be allowed to stay in the U.S. permanently unless they do. Right now, these job creators have no choice but to take their ideas and savings home with them and become our competitors. This legislation allows them to create the jobs here.

A lot of hard work has gone into this bill, over the last two years, by tech notables Brad Feld, Eric Ries, Dave McClure, Manu Kumar, Shervin Pishevar, Fred Wilson, and Paul Kedrosky. This group is launching a campaign to gain the bill political support. It is using social-lobbying tools powered by Votizen to take tweets, Facebook posts, and SMS messages and hand-deliver them to Congress. The Startup Visa website details how you can get involved and help the bill to succeed. Now it is your turn to speak up and help us revitalize the economy.