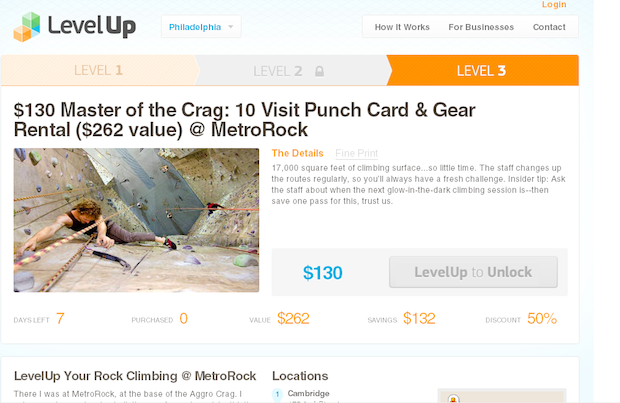 Location-based gaming startup SCVNGR, which recently closed a $15 million funding round, is entering new territory: it’s launching a spinoff service called LevelUp, which goes live today in pilot cities Boston and Philadelphia. And it’s taking on some big names, including the likes of Groupon and LivingSocial (in addition to the location-based services it already competes with, like Foursquare).

The goal of LevelUp, says SCVNGR CEO Seth Priebatsch, is to offer the immediate distribution and new customers afforded by the daily deal sites, while simultaneously maintaining the long-term engagement that location-based games are usually better at. Priebatsch says that the big deal sites will often lead to a “one-and-doner” phenomenon, where businesses attract a flood of new customers eager to get in on a deal, and then watch as those customers never come back. LevelUp wants to fix that.

The service is pretty simple. It will offer hot deals comparable to Groupon (say, $10 for $20 worth of sushi), using a website,  mobile applications and a regular email newsletter to contact customers. This initial deal is called “Level 1” and is available for seven days. Anyone can purchase and redeem the deal, the same way anyone can redeem a Groupon.

Then the differences kick in. Customers will also be able to see even better deals — dubbed Level 2 and Level 3 — which are only available to repeat customers. So, a new student at a rock-climbing club might be able to take their first lesson at a special rate of $50 for $100 worth of classes. But then a followup lesson might be even less expensive (say, $35 for $100).

There are a few more twists. First, Priebatsch is well aware that LevelUp is currently missing one key ingredient that other deal sites have: distribution. SCVNGR will not be adding its existing user-base to LevelUp, and the other daily deal sites already have millions of subscribers to their daily emails. So LevelUp is sweeting the deal. On Groupon, a business has to give Groupon 50% of the revenue generated by their deal — LevelUp is allowing businesses to keep 100% of the revenue generated by their ‘Level 1’ deals (they’ll take 25% of the proceeds from deals at Levels 2 and 3). Priebatsch says that under this system, LevelUp will only get paid if it brings repeat customers back to businesses.

The company has a few other plans that it hopes will help it get some initial traction. First, it’s running $1 million advertising blitzes in both Boston and Philadelphia (the two pilot cities for the service). And some of the initial businesses participating in LevelUp will be donating 25% of revenue from their Level 1 deals to partner organizations, like the American Heart Association and Susan G. Komen for the Cure. These partner organizations may also begin to promote LevelUp, because the more people who use it, the more donations they’ll receive.

LevelUp has an interesting and potentially compelling offering for businesses, especially since they can effectively use it for free for their initial deals. But it obviously has its work cut out to achieve distribution, and there are a couple other kinks that might crop up. First, businesses will have to get comfortable giving out very steep discounts for Levels 2 and 3 (Priebatsch explains that any margins lost here should easily be recouped from the Level 1 customers, because many Level 1 customers probably won’t wind up making it to Level 2 or 3).

Another possible issue is sticker shock — if a customer is getting super cheap discounts for their first three visits to a business, the price jump for the fourth visit could be a rude awakening. Priebatsch says that the company has done a lot of research on this issue, and that after three visits customers have often established a loyalty to the business, even with the price jump.

It’s worth noting that this isn’t the only product SCVNGR has aside from its core location game. The company got its start as a scavenger-hunt generator used by colleges for student orientation and businesses for team building. 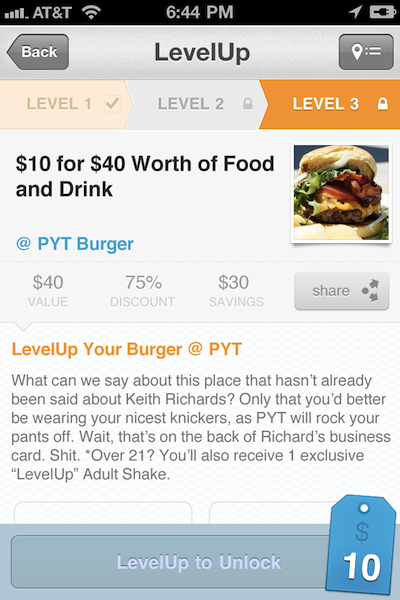