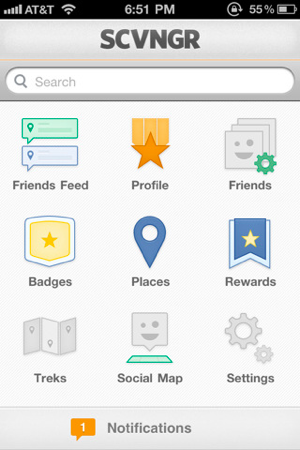 Location based game SCVNGR has raised another $15 million in a funding round led by European VC firm Balderton Capital, with participation from previous investors Google Ventures and Highland Capital Partners. As part of the deal Balderton partner Barry Maloney will be joining the company’s board. This brings SCVNGR’s total funding to nearly $20 million after a $4 million round in December 2009 (and some seed funding before that).

That’s a lot of money for the still-young startup, and we’re hearing from one source that this most recent round was raised at a valuation of just over $100 million. Impressive.

SCVNGR is a location-based service, but it differs from apps like Foursquare and Facebook Places because it puts a much bigger emphasis on gaming (yes, Foursquare has points and badges, but its gaming mechanics really aren’t very fleshed out). SCVNGR revolves around challenges — check into a local burrito joint, and you might get prompted to answer a trivia question, or take a photo wearing the burrito tinfoil on your head. Businesses can customize their challenges to be as ridiculous, or straightforward, as they’d like.

SCVNGR caters to local businesses and chains alike, and it’s had brands like American Eagle and Coca Cola running campaigns using the service.

CEO Seth Priebatsch says that the company will be using the money to drive SCVNGR’s growth abroad (he says that this was one reason why the company went with Balderton, which is based in Europe). He says that some of the money will also be used to further research game mechanics to see what translates well in the physical world.