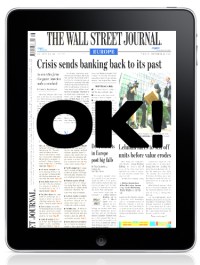 I think we are all still pretty skeptical of the tablet-based newspapers right now — nothing against them, it’s just a question of scale and pricing. With surprisingly low pricing like the Daily’s, or (relatively) high pricing like the WSJ’s, can they get enough people to subscribe to make turn a dollar?

As it turns out: yes, at least on the Wall Street Journal’s part. The paper’s publisher, Les Hinton, says the number of tablet subscribers to the WSJ has quadrupled since last year, and is now hovering around 200,000. The paper itself has a circulation of about 1.6 million, so that’s not bad at all.

Then there’s the Daily, which is a different value proposition, being only on the tablet. My guess is they’re struggling for subscribers right now, but they probably expected that to happen. They’re among the first to go all-tablet, and that’s risky. But if they’re willing to spend the money at the beginning, they can work out the process, squash the bugs, and be at 100% when the others launch their inevitable competitors.

Two sure things: the market is growing and people are willing to pay, so it’s too early to call it one thing or another.