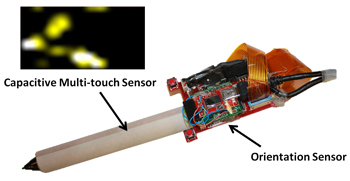 Here’s an interesting research project being presented at Microsoft Research’s TechFest. The idea is an intelligent stylus that’s aware of how you’re holding it, allowing it to change function depending on whether it’s upside-down, being gripped at the very end, or towards the back, like a paintbrush.

And although there are precious few applications for stylii these days, the project team hopes the tech involved could be integrated with, say, a game controller or other interface device, that would know when it’s being used as a steering wheel, an FPS controller, and so on.

The pen itself is one big capacitive surface, and it has an orientation sensor on the end so it can… you know, tell its orientation. The picture obviously shows a research prototype; the tech could be smaller or integrate more closely with the existing chipsets in mice and contollers and such. Hopefully we’ll see more of this thing soon.