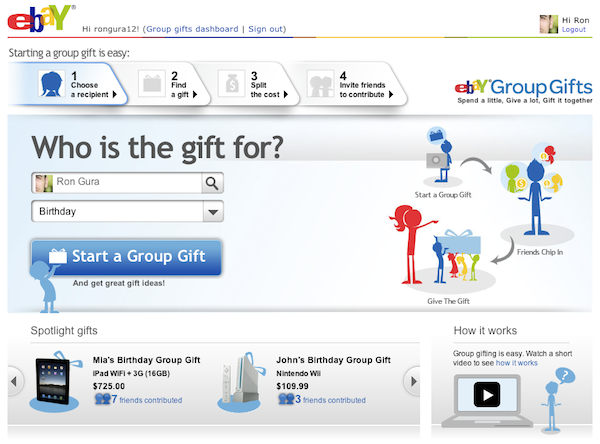 Last month we wrote about The Gifts Project’s closing of a $1 million funding round. Today the company is finally able to lift the veil on a major accomplishment … turn out it is its gifting platform powering eBay Group Gifts.

The upstart also managed to have Index Ventures join the round, with Saul Klein actively advising. The actual amount is undisclosed.

With The Gifts Project, online retailers will be able to offer groups of people the ability to chip-in and buy a gift together for a mutual friend, colleague, or family member. A pretty simple idea with a promising potential considering social commerce is going gangbusters.

What makes The Gifts Project compelling in my opinion is not only the size of opportunity in social commerce, but that it’s designed to sit rather cozily within the online purchase flow.

The eBay deal is a tier-1 endorsement for social commerce by an ecommerce giant. But also, it’s a major vote of confidence in The Gifts Project’s ability to support major online retailers as a technology provider, because surprisingly, eBay Group Gifts was hosted on by The Gift Project, rather than on eBay’s infrastructure.

With both products, The Gifts Project provides a full-fledged solution for group gifting that taps consumers’ social graphs, allowing friends, family members and colleagues to individually chip in and buy gifts together.

Consumers are led through a flow where the group buy is initiated, friends are selected, contributions are tracked, and finally the gift is provided.

Early testing and data from eBay Group Gifts has shown a significant increase in average ticket price. That is, the average sale price of an item.

With social commerce exploding, timing couldn’t be better for The Gifts Project. The obvious question is will they be able to scale their business? Time will tell of course, but it certainly feels the stars are beginning to align for them. Now there’s only that pesky little thing called ‘execution’. 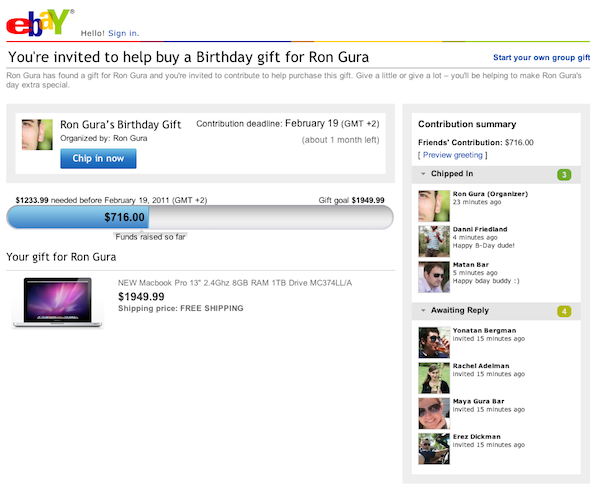