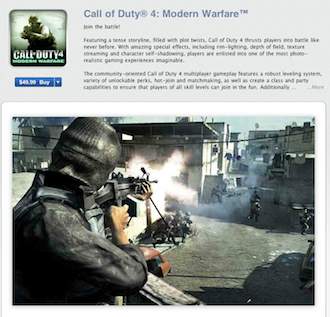 It has now been a week since the launch of the Mac App Store. So far, the reviews have seemed fairly mixed. While nearly everyone praises the simplicity of the store, and Apple touted 1 million app downloads in the first 24 hours, most also seem to agree that there’s still a lack of killer content. And exactly that’s what it’s going to take for the store to be successful longterm: killer content. And one new app may be a good gauge for such content: Call of Duty.

Specifically, Call of Duty 4: Modern Warfare has just hit the Mac App Store. Apple wasted little time in featuring it in a main store banner today. To be clear, the game is not new: it was first released in 2007 and then for the Mac in 2008, but the series is hugely popular amongst gamers. And this version of the game alone has sold over 13 million copies.

So how it does in the Mac App Store should be telling. And Apple undoubtedly hopes it will be a big hit. There’s no question that gaming is going to have to be one of the huge categories if the store is to succeed. And they’ll need to convince publishers to put other popular games like Call of Duty in the store.

And if it’s a big enough hit, it may even entice developers to add the Mac platform to their list of must-develop-for systems. Traditionally, Mac gaming has lagged behind both PC and console gaming. But just as we saw with the iPhone App Store, publisher focus can quickly shift if they smell… money.

Speaking of that, Call of Duty 4 sells for $49.99 in the store. That’s pretty typical for games of this nature, but again, this game is old. On Amazon, it’s selling for only $32. So will users pay for the convenient download and simple install on multiple machines? We’ll see.

The game is also massive in size, at over 6 gigabytes, so it’s going to take a while to download even on a fast connection.

And don’t forget that if these more expensive games do take off, Apple’s 30 percent cut could actually mean some significant money.