In December, after months of anticipation and discussions with third-party developers, Google finally unveiled the Chrome Web Store — an online portal that lets users purchase and ‘install’ web applications like TweetDeck, MOG, and hundreds of others. It’s one of the first platforms that helps developers monetize web applications using a unified payment system (in this case, Google Checkout), and it’s going to be deeply integrated into Google’s Chrome browser. Unfortunately, as far as we can tell, nobody is really buying anything on it.

The UI for the Chrome Web Store looks very similar to iTunes, and, just like iTunes, one of the most prominent sections is a list of ‘Top Paid’ applications. Sitting at the top of the list is Toddler Jukebox, a colorful little app selling for $1.99 that lets you play twelve children’s songs, like ‘Wheels on the Bus’. And, according to the Web Store stats, it’s been installed six times this week. Ouch.

To be fair, Google isn’t sorting its ‘Top Paid’ list in order of purchases (though I’m not sure why) — a few of the other applications in the list are doing better, but even those are still showing lackluster sales. The paid application with the most recent activity is MathBoard, which has 65 weekly installs and sells for $2.99 (less Google’s fees, so it gets around $2.56 a pop). In other words, it’s earning around $165 a week. That’s not nothing, but given that every other app on the store is probably making less than that, it’s not good.

Now, it’s possible that sales slowed a bit over the holidays, but the impact couldn’t have been that huge. There is, however, one more significant explanation for this: Google hasn’t done much to expose the Web Store to users. In fact, the current stable release of Chrome still doesn’t actually feature the Chrome Web Store anywhere — it only shows up if you go to the Web Store directly and install an application. That said, Google has placed banner ads for the Store on some sites (including TechCrunch), and the store got loads of publicity at launch, so it’s not like it’s a secret.

There are some free applications that are getting far more attention, like Quick Note, which has 8,000 installs this week. Obviously it’s common for free applications to get more installations than premium apps, but the discrepancy — 65 paid installs versus 8,000 free — seems pretty steep.

One thing is clear: Google has a long way to go with the Web Store. It’s still impossible to distinguish applications that are basically just bookmarks from those that are full-fledged web apps. And while the purchase flow itself is pretty simple (you can buy something in a couple clicks, assuming you already have a Google Checkout account), I think Google will have to put some work into educating people on what exactly they’re paying for.

Thanks to Brian Kennish for the heads up. Kennish is the man behind Disconnect, a browser extension that lets you block services like Facebook Connect 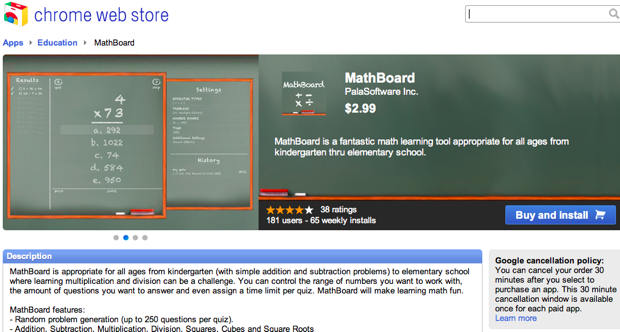