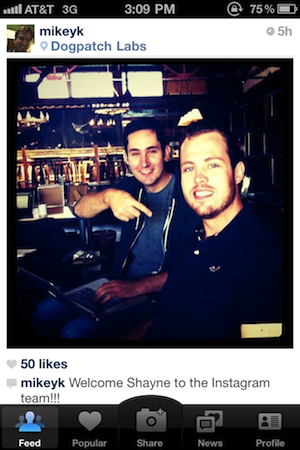 A few weeks ago I wrote about some office space that was available in the South Park area of San Francisco’s SoMa district. Why was it interesting? Because it was Twitter’s original office. And that’s exactly how the startup that currently owns it, One Block Off The Grid, was pitching it to startups in hopes that they would sublet it. Well, they found one.

A certain startup getting an amount of early buzz that some might say is comparable to that of an early Twitter is taking the lease: Instagram.

In fact, the photo-sharing startup secured the space today, co-founder Kevin Systrom tells us. Previously, they had been working out of Dogpatch Labs in San Francisco. But that was when they were a company of only two: Systrom and co-founder Mike Krieger. But now they’re a team of four.

The company has just hired their third full-time employee, Shayne Sweeney. Systrom describes him as a “rockstar iPhone dude” and notes that he helped build the popular Foodspotting iPhone app. Additionally, the company has a fourth employee, Josh Riedel, who is helping out part time as the community manager.

The move to Twitter’s first office is a homecoming of sorts for Systrom. “I’ve always loved South Park — after my internship with the Odeo folks, I used to go visit them at that office. So when the opportunity arose, I figured we should jump on it,” he says. Odeo was the podcasting startup that eventually gave birth to Twitter.

“Karma: This is Twitter’s original office“, is how the office space was being pitched. Will that be good karma for Instagram? Do they even need it given their current growth?

And no, they didn’t need new funding to secure the space.

Update: I’m told that while the company Sweeney worked for, Egg Haus, did design work on the Foodspotting app, Sweeney didn’t actually have a role in it.