Today Kleiner Perkins is holding a special event at Facebook headquarters to announce the launch of a new $250 million social-centric sFund, which will foster a new generation of companies tapping into the social graph. And there’s plenty of other news being announced from the partners involved, which include Facebook, Zynga, and Amazon. Amazon CEO Jeff Bezos just introduced a new Free Usage Tier for AWS, the extremely popular suite of cloud-based services that let developers outsource some of their infrastructure to Amazon.

Details of the new free tier are right here. The tier will allow developers to use 750 hours of Amazon EC2 per month, 5GB of Amazon S3 storage, and more (you can see the full details below). But some of the features come with a catch: you can only get access them for free if you’re a new AWS customer, and after twelve months you pay Amazon’s normal pricing. However, some of the features, including SimpleDB Machine Hours, and requests to Amazon’s Simple Queue Service and Simple Notification Service, don’t expire after a year and can be used by existing AWS customers as well.

This is a smart move from Amazon — it’s a great way to get developers hooked on the platform, and once they’ve been on for a year they’re probably going to stay there as opposed to switching to a competing cloud service provider. That said, it’ll be interesting to see how the many developers already on AWS react (and if Amazon will be proactive about hunting down newly created secondary accounts). 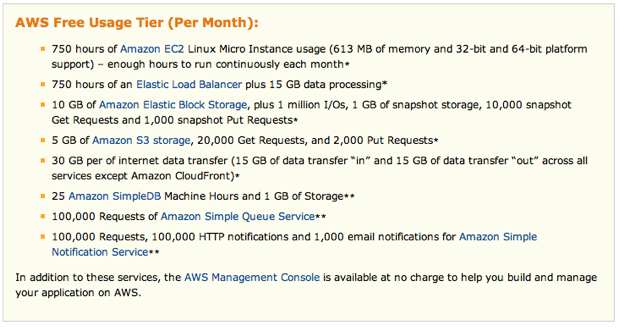