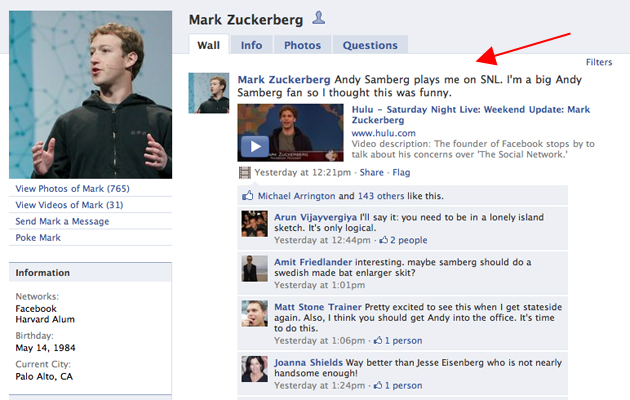 After this weekend’s Saturday Night Live/Facebook double header, Facebook CEO Mark Zuckerberg posted a Hulu link on his Facebook profile pointing to his faux guest appearance on “Weekend Update,” with the status “Andy Samberg plays me on SNL. I’m a big Andy Samberg fan so I thought this was funny.”

While having a sense of humor is pretty much a necessity if you are at the forefront of pop culture (and yes a top grossing Hollywood movie about you currently in theaters as well as not one but two skits about your company on SNL is pretty much that), I think it’s particularly funny that Zuckerberg found the following lines funny.

“So Mark you went and saw The Social Network? Don’t be ridiculous, I’m 26 I stole it online.”

“I had three friends, because parents count. Do turtles count? No. Okay then, just the three.”

“I invented Facebook Seth, I didn’t invent getting successful to meet girls. I guarantee that the first thing the guy who invented the wheel did was roll up over some ladies … We’re men, we use what we’ve got.”

“I may not like what it says but its a really good movie.”

“Sean Parker gets Justin friggin Timberlake and I get Jesse Eisenberg. It’s like, hey we’re making a movie about Steve Jobs and Bill Gates. Steve you’re going to be played by Brad Pitt and Bill you’re going to played by a cardboard box with glasses on it.”

“My one regret for Facebook is ‘poking.’ Poking is creepy and lame and getting an email that your dad poked you is an enormous bummer.”

Well, maybe Zuckerberg didn’t find all of it funny, as he does expresses some confusion about the “hoverboard money” part, which former Facebook Senior Platform Manager and current Path co-founder Dave Morin found “definitely clutch” (Kimberly Parker helpfully explains). But hopefully Zuckerberg’s appreciation of the skit means we will see a less annoying alternative to poking in the near future.

Side note: Mad props to Paul Jeffries for his “Ali G Pitches A VC” reference, which is funnier than both the SNL skits combined. And apologies to our foreign readers for the Hulu embeds.