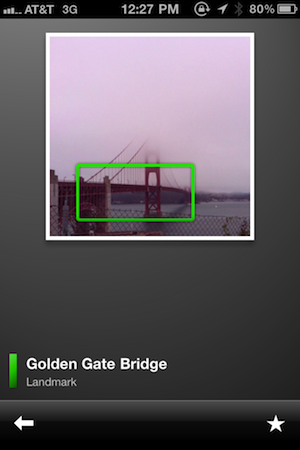 One of the biggest downsides of being in the iPhone camp rather than the Android camp is not getting early access to some of the cooler mobile things Google is working on. One of those is Google Goggles, a visual search feature that launched last December for Android. Now, almost a year later, it’s finally here for the iPhone as well.

As they’ve announced on their Google Mobile Blog today, Google has placed Google Goggles for the iPhone as a feature inside of their Google Mobile app on the device. That app, which already allows you to search via text and via voice, now is even more powerful.

In the new version of Google Mobile App just tap on the camera button to search using Goggles. Goggles will analyze the image and highlight the objects it recognizes — just click on them to find out more.

Google notes that Goggles is still a Labs project as they continue to perfect it. They say that it works well for things such as landmarks, logos, and products, but not so well yet for animals or food — they’re working on that.

I’m not seeing the latest update to the Google Mobile app in the App Store just yet, but Google says it should be rolling out throughout the day. It’s a free download.

Watch more in the video below: