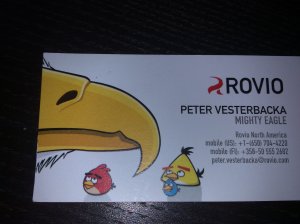 Journalist Monty Munford is the only other person I know who seems to just roam the planet on a whim, finding interesting things in somewhat random countries. (Appropriately, I met him at a cricket game in Mumbai. I was researching my book on entrepreneurship around the world and he was just wrapping his latest Bollywood film.)

A few weeks ago he wrote a post for us about Somaliland using mobile and wire services to become a cashless society. Yesterday, he sent me a note from Helsinki. As far as I can tell he flew there just to get an Angry Birds toy for his kid. He did a little reporting for us on the phenomenon while he was there. Reminds me of the early days of Facebook when a young Mark Zuckerberg had “It’s CEO, Bitch” business cards and supreme confidence he could take over the world. He kinda turned out to be right. Will Rovio’s Mighty Eagle Peter Vesterbacka?

“At the moment the guys at Rovio are probably the happiest company in the world. Completely self-funded and already highly profitable the company is big-headed and they have big plans.

Peter Vesterbacka’s self-styled job title is The Mighty Eagle (named after a new character in the game) and he happily describes the previous power of the carriers as ‘like being under the control of our previous neighbours, the Soviet Union’. He can hardly contain himself as he tells of how they keep turning down offers from Hollywood and ridiculing the studios for ‘promising to make us famous’.

After previously developing more than 50 games the Finnish company have only made one game in 2010 and have struck gold. They recently announced that the Angry Birds beta for Android had hit more than one million downloads after selling more than seven million on the iPhone. This for a game that an original team of four made for less than $100,000.

Rumours that the company is moving into the toys business are true. The initial production will see 20 characters in different colours and while Christmas may come too soon, expect these toys, powered by a ‘military-strength’ rubber-band, to be catapulted across school and offices next year.

Angry Birds will also be flying across social networks to Facebook with a game slated for 2011. Citing Super Mario as the brand they wish to emulate the company also plan to ramp up to console and probably everywhere else.

Anywhere else, Vesterback’s buoyancy and self-importance would be grating, but his enthusiasm is infectious and this is a fabulous of the little guy sticking it to the man. What’s more he has a pretty cool business card.”