The whole “flash sale” phenomenon is interesting. Traditionally, the idea of “impulse buying” has been viewed as a somewhat bad thing. Purchases are supposed to be thought out and studied — made only after you’ve considered things for a while, right? The Internet has flipped that idea on its head. But that’s not a bad thing.

Bloomspot is one of the newer players in the flash sale scene. Launched in January of this year, they currently cater to three cities: San Francisco, New York, and Los Angeles. But unlike competitors in the space, they’re not all about as moving as much of a product as possible in a short amount of time. Instead, they’ve about creating relationships between clients and customers. The features (they don’t call them “deals”) are simply the first step to facilitate this relationship.

And Bloomspot also differs in that they’re going for a very specific type of both client and customer: luxury hotels, restaurants, and spas that cater to more affluent, mature clientele. And now Bloomspot has just raised a $9 million Series A round of funding to further pursue this market.

I sat down with Jasper Malcomson, Bloomspot’s CEO and co-founder (and a former manager of travel and commerce at Yahoo), to talk a bit about the service today. He has very clear vision for what he wants the company to go after. They’re not trying to be Jetsetter, selling people dreams of traveling around the world on a whim. They’re trying be cater to the more practical-minded but still affluent audience who perhaps just want a weekend getaway.

Bloomspot is focusing on places people want to go already — such as a winery in Napa Valley — but hesitate for whatever reason. These aren’t places across the world, these are places relatively close by. By giving them a limited-time offer attractive package, it pushes them over the edge. It’s not so much about deeply discounting rooms as it is about adding experiences on top of the price (such as spa treatments, etc) that make it that much more appealing. 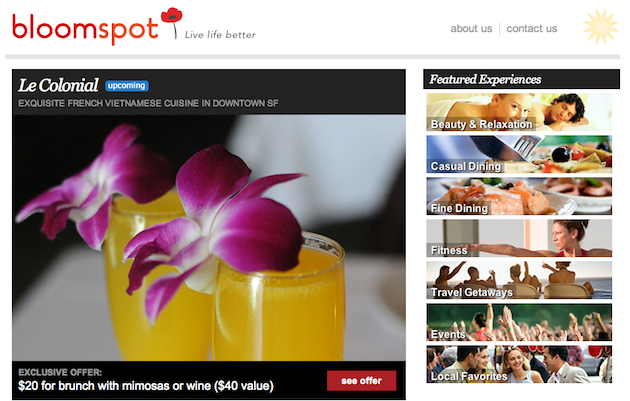 This idea is important because Bloomspot isn’t aiming to become the way that everyone can experience luxury cheaply. They just want to entice the people who would likely be suited for these types of places, to go. The venues love that because they know that these type of people will fit in with the overall experience and will still be willing to spend the money on other things like food once they’re there.

In other words, they won’t be cheap.

And, if those people enjoy the experience enough, the likelihood that they’ll come back greatly increases. In that regard, Bloomspot is almost like an interactive advertisement or a try-before-you-buy service for these venues.

“The long term way to attack the space is customer quality,” Malcomson says. In group buying, that doesn’t matter because a merchant doesn’t care who buys an article of clothing as long as it’s sold. It’s different with these more experience-oriented clients that Bloomspot deals with.

And Bloomspot offers them a way to help move unsold slots if it’s a slow time of the year or business is down for whatever reason. Bloomspot just needs a few days to put a new feature in place.

Malcomson says that 68 percent of Bloomspot’s audience is 30 years old or older. You can compare that to group buying sites where around 70 percent of customers are 18 to 35. Again, affluent and older, that’s what Bloomspot is going for.

Bloomspot gets a 30 percent commission on sales pretty much across the board, no matter which feature they’re selling, Malcomson says. This means that they’re already pulling in a fair amount of revenue, though they are not yet profitable.

While Bloomspot is currently live for the three aforementioned cities, they will also be launching in Boston and Washington D.C. on October 3. After that, Chicago, Dallas, and Houston are up next.

This Series A round of funding was led by Menlo Ventures with participation by seed investors True Ventures and Harrison Metal.

This $9 million is on top of the $2 million seed round from March 2009 that included investors Jeff Weiner (CEO of LinkedIn), Erik Blachford (Chairman of TerraPass and former CEO of Expedia Inc.), and Brad Garlinghouse (President at AOL, Consumer Applications Group).