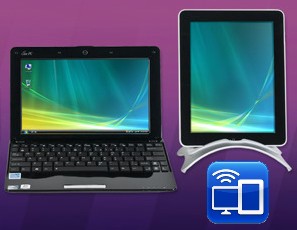 One of the really handy things you can do with your iPhone, iPod touch, or iPad is use it as an extra screen for your computer. Until now, though, if you wanted to use your iPad to extend your Windows system, you were limited to iDisplay. Now, competing app Air Display ($10) has a Windows version, and they’re saying that it’s better than those other guys. They go so far as calling their compression algorithm “clever.” Sounds like it’s on.

There’s no way to tell without testing, of course, so we’ll put them head to head in a bit and see which one is worth your money. The new drivers for Air Display work on XP forward, by the way, which was a big relief for yours truly.