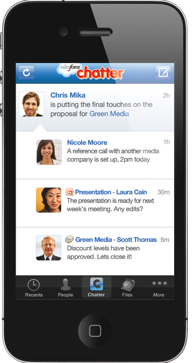 As Salesforce’s foray into social collaboration, Salesforce Chatter, gains traction amongst enterprise users, it makes sense for the company to launch complimentary mobile apps to the platform. And as the enterprise increasingly relies upon mobile devices for connectivity; there is a strong demand for native mobile use of Chatter. Today, Salesforce is taking Chatter to mobile phones; unveiling Chatter Mobile apps for the iPad, iPhone, Google Android and BlackBerry devices.

Salesforce Chatter, which was originally announced last November, was launched into public beta in June after four months in private beta. In the realtime collaboration platform’s firts three months open to the public, Chatter has been adopted by 20,000 companies; with 25 percent of Salesforce’s client base using the platform. .

Chatter Mobile includes all of the functionality of the web-based product. With Chatter Mobile, users will be able to monitor their Chatter feeds, including posts from colleagues and alerts from apps, as well as post status updates and comment on conversations taking place within their company.

Chatter was launched as a platform to deliver realtime access to data and information, using social sources, such as YouTube and Twitter. Similar to interactions on Facebook, employees can create business profiles with professional information like personal contact data, area of expertise, and work history. Searching other people’s profiles, colleagues can quickly identify individuals who are relevant to their enterprise needs. Users can post status updates to share communications, files and links around a project, sales deal or customer support case. And users can see realtime feeds of personalized updates from people, applications and documents.

Of course, with a mobile platform, it would make sense for Chatter to leverage GPS of users and get into the location game. However, Salesforce says that while location-based services aren’t shipping out on the first version of the app, location features could be included in future versions. Salesforce is also announcing that third parties can now integrate Chatter into their mobile apps as well.

Originally Chatter was available within the Salesfore CRM apps, which have seen 250,000 downloads from the Apple App Store and more than 100,000 from the BlackBerry App World (You can see a demonstration of the Chatter on the CRM app here.)

With the launch of mobile apps and a mobile app ecosystem, it looks like Chatter is becoming a full-fledged independent platform. Earlier this spring, Salesforce launched an app marketplace for Chatter, called ChatterExchange. As the need for social networks within the enterprise grows, Salesforce wants Chatter to be a viable option for existing customers and new customers who may not have need for the CRM application or Force.com platform.

However, while Chatter looks and feels like a social network, CEO and founder Marc Benioff has been fairly adamant that Chatter is best characterized as a collaboration platform, not a social network.

That being said, the social network/collaboration platform is a competitive space. Yammer is launching soon as a full-fledged social network for the enterprise, and Jive, Bantam Live, and SuccessFactor’s CubeTree also offer compelling products. 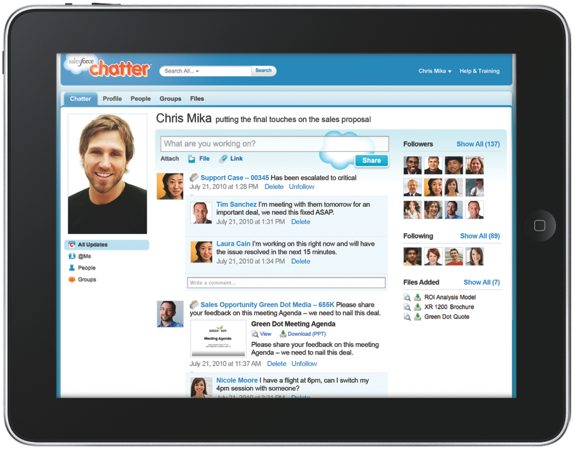