When Salesforce’s enterprise-friendly social collaboration platform Chatter was announced last Fall, we focused on the social features and connectivity it could bring to the enterprise. It was, in fact, Salesforce’s first major venture into the social networking and collaboration space, and many think Chatter’s innovation will have a lasting impact on the enterprise and cloud computing.

But Chatter, which launched in private beta earlier this year to 100 customers, is slowly growing up, adding more customers and developing its own ecosystem. Today, Salesforce is expanding the beta program and launching ChatterExchange, a marketplace for Chatter Apps.

Leveraging what Salesforce CEO and co-founder Marc Benioff calls the Cloud 2, Chatter is delivering realtime access to data and information, using social sources, such as YouTube and Twitter. And today, Salesforce is announcing that Chatter is now being used by 500 clients, with the company adding 400 more customers to the Chatter private beta group.

Taking a page from the enormous success of Salesforce’s App Exchange, the company is now creating a Chatter-centric marketplace for third-party apps, called ChatterExchange. A few weeks ago, Salesforce opened up Chatter’s API to developers so they could build compelling apps to compliment the usage of the collaboration platform. More than 12 Chatter-Enabled partner applications are now available in the ChatterExchange on AppExchange 2, including: Appirio, CA, Docusign, Echosign, Fairsail, FinancialForce.com, Genius.com, Job Partners, Jobscience, ServiceMax, Xactium and more. Salesforce has also integrated 15 Force.com labs apps into the ChatterExchange, including Chatter Timeline, Chatter Live Tag Cloud, Chatter + Google Alerts, and more. Prices of apps range from free to $10 on average.

Chatter itself will retain the same functionality. Chatter gives you a dashboard of reports and approvals, workflow, tasks and calendar and will let you see updates from people, files, applications, HR, and will integrate other feeds (Dow Jones, Thompson Reuters).

Similar to Facebook, employees can create business profiles with professional information like personal contact data, area of expertise, and work history. Searching other people’s profiles, colleagues can quickly identify individuals who are relevant to their enterprise needs. Users can post status updates to share communications, files and links around a project, sales deal or customer support case. And users can see realtime feeds of personalized updates from people, applications and documents. With Chatter, all status updates from a customer’s Sales Cloud, Service Cloud or custom Force.com application are posted to the feed. So apps actually have the ability to post status updates, similar to a person, creating an actual ecosystem around apps and employees. Any app listed on Salesforce.com’s AppExchange will be able to stream updates to the Chatter feed. Since they are delivered on the Force.com platform, developers can build or enhance cloud applications to use Chatter’s profiles, realtime streams, and APIs.

Later this year, Salesforce will end its private beta period and all 72,500 Salesforce.com customers will receive Chatter at no additional charge. It comes as no surprise that Salesforce is creating an ecosystem around Chatter; its AppExchange has done phenomenally well and has even served as a model for outside enterprise products. For example, Google Apps just launched a marketplace for its productivity suite that seems to take a page from Salesforce.

While Chatter looks and feels like a social network, Benioff has been fairly adamant that Chatter is best characterized as a collaboration platform, not a social network. In fact, Salesforce doesn’t see its main competitors as Facebook, Twitter or even enterprise friendly social networks like Jive or Bantam Live.

Instead, the company believes Chatter will pose a serious threat to Microsoft’s Sharepoint and IBM’s LotusNotes. 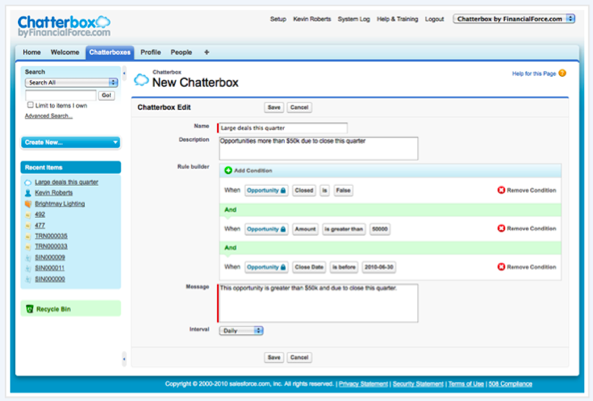