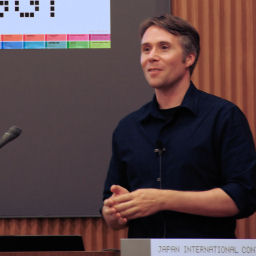 In April of this year, signs started pointing to Google getting serious about gaming. That was when they hired gaming industry vet Mark DeLoura (formerly of Ubisoft, Sony Computer Entertainment America, Nintendo and others) to be their developer advocate for games. At the time of his hiring he told gaming blog Gamasutra, “I personally feel that Google hiring someone specifically to focus on games is a signal from the company that they recognize the growing importance of games as a medium.”

As he has announced on his blog today, DeLoura left Google on Monday. “There are a lot of very interesting things going on at Google right now, and I enjoyed working with many of the people there, but it was not the perfect fit for me,” he writes.

What’s odd is that DeLoura was just in the news (as in, last week) about Google games because of the presentation he gave at GDC Europe showing off the Chrome Web Store for the first time. Obviously, a big part of this store is going to be games. And in fact, a few key slides DeLoura focused on showed games such as the popular game Plants vs. Zombies coming to the store.

In his post, DeLoura states that he’s optimistic about the idea of running apps in the browser going forward. For gaming specifically he cites his excitement for gaming moving to the cloud, but notes things need to get more trans-platform rather than simply cross-platform (games made for different devices versus simply ported over). He actually says Microsoft is leading the way in this right now with XNA and Silverlight. He says Apple is going a good job too and that Google is finally getting there thanks to Android NDK and Chrome Native client.

Wrapping up his post, it simply sounds as if DeLoura may have been overworked. He apologizes to those he’s neglected over his past few months at Google and promises to remedy that.

In July, we revealed that Google had secretly invested $100 million in social gaming company Zynga. Meanwhile, they continue to scoop up smaller gaming companies and talent — this despite Google CEO Eric Schmidt’s statement that they’re unlikely to get into “significant” gaming.

We’ve reached out to Google to get a little more clarification as to why DeLoura left so quickly and to see if anyone will be replacing him. We’ll update when we hear back.

Update: Here’s the statement from a Google spokesperson:

Mark is a well-respected gaming industry veteran and we wish him well in his future endeavors.