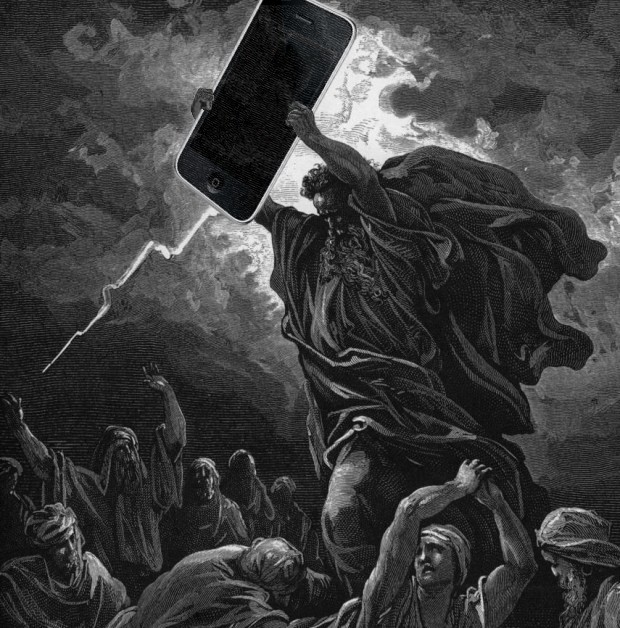 Much ink has been spilled, and many a pixel lit, on objects to which people feel an unreasonable loyalty. Blood, too, depending on whether you’re willing to classify the likes of Crusaders and soccer hooligans as fanboys. And why not? These rivalries, from the biblical to the forum-bound, all have a certain distinctive unreason to them. Yet there is nothing more reasonable than sticking by your choices, your judgments, your perceptions — your brands.

So how do things get so venomous? It seems like pitchforks are issued with every browser these days. Let’s see if we can make sense of why so many of us end up escalating to such absurd heights something so clearly trivial.

To begin with, let’s have a little therapy session. I want you to repeat after me: “I am a fanboy.” Or fangirl. Go ahead, say it. You don’t have to actually say it. But recognize that you are one — not necessarily for something obvious, or in an obvious way, but you are. Okay, I’ll start. I’m a not-using-Twitter fanboy. I’ve written about it before, and even though my friends and colleagues make excellent arguments for it, I refuse to. Why? Because it’s one of the things on which I can take a stand and (this is crucial) see the effect of that stand.

That’s really all there is to it, isn’t it? We all want to take a stand, we all want a conflict, we all want to be fighting for the right side of something. And the fact is that for some of us, our brand choices are among the most important things in our lives. Yes, brand shapes us more than we’d like to admit (it’s arguable even that our religions and political parties are increasingly brandlike. That was actually part of the discussion that led to this article: buying a webOS tablet over iOS or Android would be like voting for Nader. Well, there was more to it than that, but you get the idea). There’s a sort of existential nausea that accompanies this banality, so we create entire mythologies peripheral to those choices in order to increase the scope of the conflict.

How else could Mac versus PC, or iPhone versus Android, devolve into meta-discussions of rights to privacy, corporate mottos, the personality traits of executives? Like pedantic philosophers, we abstract ourselves again and again from the real issue, until we’re arguing about the meaning of “is.” And on those levels of abstraction, it’s difficult to prove anything one way or the other. And that’s just the way we like it, because then we can argue forever from an unassailable position, and because the issues have become so fundamental, we can entertain a lively and very real disdain for our opponents and their brands.

The thing is, this sort of obfuscation doesn’t really work in person. And very few people actually like arguing for more than a minute or two about such trivial brands as PC and Mac. Online, though? Oh my. Oh brother.

As many others have noted, anonymity combines on the internet with an inflated sense of authority to create the fearsome flame-beast. Safe in our basements, we can say things we wouldn’t dare say in person. Though we may argue with an acquaintance in a bar over whether the Xbox 360 or PS3 has the better game library, there is a ceiling to the discussion beyond which the greater number of us, being naturally meek and inexperienced in true conflict, will simply acquiesce and move on.

Online, though, there is no ceiling, or if there is, it’s more of a mile marker than a warning. Personal insults, then using Latin names for fallacies, and eventually making Holocaust comparisons are just stages of the debate.

But it isn’t simply because we’ve taken the limiter off the argument (“when people stop being polite – and start getting real”), exactly, but because of the weight we have to put on the subject. Have to, because we have no other subjects on which to place that weight.

At the risk of enraging the religious subset of our readership, I think the most appropriate comparison is to holy wars and other god-related conflicts. Territorial disputes gain a certain flavor when spiced by conflicts of celestial ambit. This spiritual umami is the only thing that can precipitate such enormities as genocide and holy conquest, and in order to justify such things it is often simulated.

It’s the same for fanboy arguments. You’d have trouble making it to Holocaust-grade raillery on the strength of two competing products’ app stores. But add a dash of that delicious right to privacy, or the notion of censorship, and the argument takes on a life of its own.

It may be that fanboy arguments serve the same purpose as religion, as famously expressed by Marx. Perhaps if he were writing this article, he might have said (though probably not): “Fanboy distress is at the same time the expression of real distress and the protest against real distress. Fanboyism is the sigh of the oppressed creature, the heart of a heartless world, just as it is the spirit of a spiritless situation. It is the opium of the internet.” Lacking anything real in life, the fanboy latches onto that which he has, and imbues it with the significance he craves. Fanboyism is an expression of the intellectual desperation we all feel resulting from the trivial trappings of internet culture.