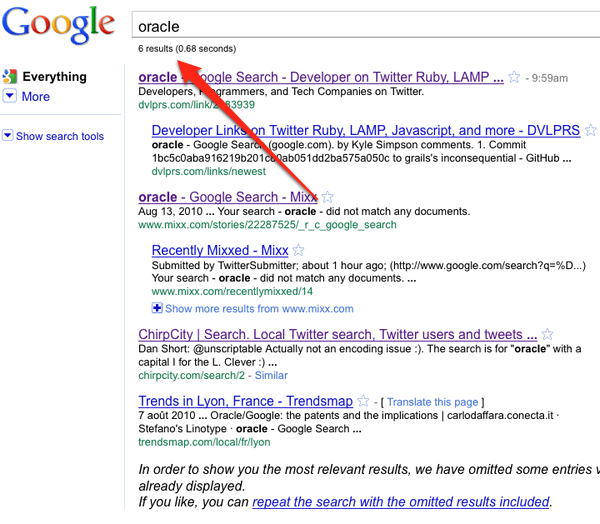 Picture this. You’re the world’s biggest search engine, and you just became the target of a patent lawsuit that could potentially put your massively successful mobile operating system at risk. Your hardware and carrier partners are keenly watching your response, not to mention the constant government scrutiny you see on a day-to-day basis. So, throwing caution to the wind, you pull out your digital middle finger and delist your opponent entirely from search results, then shoot off an internal memo with the subject line “FREEDOM” and a link to the Braveheart Theme.

That’s the story that IPWatchdog published last night, claiming that Google “seemingly tampered with [its] search algorithm and database by eliminating Oracle altogether” from its search engine (okay, there wasn’t anything about an internal memo). Gene Quinn, the article’s author, claims to have confirmed the search issue at 3 PM EST yesterday, stating that it was back to normal a few hours later. Unfortunately, it’s totally bogus.

As Giorgio Sironi spells out on his blog, some trickster used a variety of UTF-8 characters (not from the standard English alphabet) to craft the query, which yielded a mere six results. It’s easy to see why someone might mistake this at first glance — I suspect IPWatchdog “confirmed” it by clicking on a link to the misleading query, rather than entering it themselves.

However, as far-fetched as all of this may sound, Google has had glitches when it came to searching for competitors. Back when the Palm Pre first made its debut, Google Mobile couldn’t find any results for it. That was pretty clearly a temporary glitch, though, as other queries containing the word “palm”, like “palm tree”, were coming back empty as well.