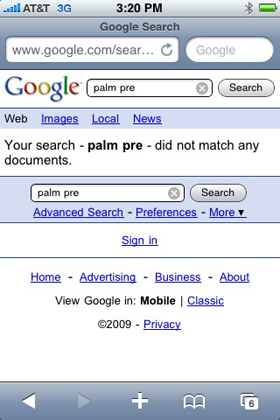 Right now if you run a Google search for “palm pre” from a mobile phone, you’ll be shown that there are 0 pages related to Palm’s upcoming smartphone, which will soon faceoff with Google’s Android, Blackberry, and the iPhone in the battle for touch-screen supremacy.

In fact, a number of searches with the world “Palm” in it are turning up zero results (even “palm tree”), though many searches still work just fine. The bug seems to have existed for at least the last two days according to recent tweets.

The issue seems to only be affecting Google’s mobile site, which is used for both the iPhone and the G1 (as well as a number of other phones).

Thanks to Brian Krausz for the tip.