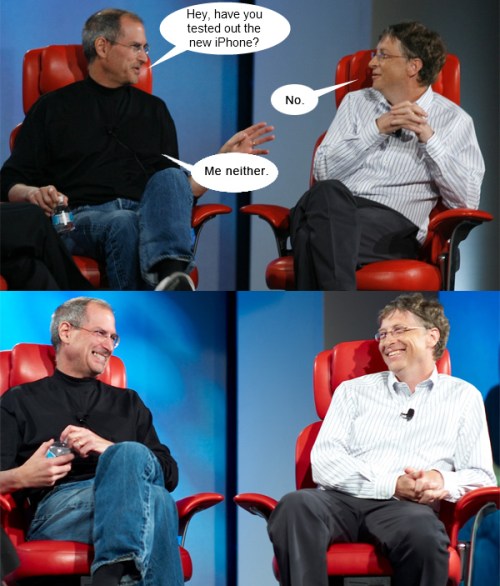 We all know that the iPhone 4 is a great device, but it makes calls about as good as BP can plug an oil well. Yeah, put on a case and it works better, or update the phone and see your “true” signal. We went through this last week; “it’s not just the iPhone 4, it’s every iPhone and every other mobile out there.” But does that explain the new dead zones we see?

In order to prove that the iPhone isn’t alone at getting bad service, Apple has been dishing out the comparisons to almost every phone out there. For those of you who thought the Droid X was excluded from Antennagate, guess what? It’s not, at least that’s what Apple says. Eat that Fandroids.

Note to mobile companies: don’t make a phone that loses bars when held or else Apple will tattle to everyone. And they’ll tell them with a fancy video.

What do you think? Has Apple’s control of the mobile market gone to their heads?

Note: Yes, there has been lots of coverage on the iPhone 4. It’s not that we don’t have better things to do. It’s that we hold Apple to the highest standards of excellence. It’s just not like them to produce an expensive product that fails at its basic function. It’s like BMW coming out with a new 5-series that isn’t fun to drive…uh oh.