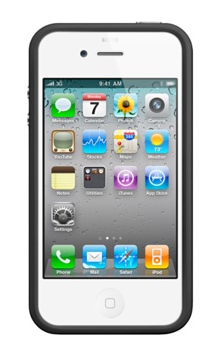 By now you’ve heard about the antenna issues some people are having with the new iPhone 4. Basically, it seems like wireless signal strength degrades if you hold the lower left corner on some, but not all devices.

This has been shown on video and there are many reports out there about this issue — something that is particularly troublesome for left-handed people. I’m sure a lot of people have asked Apple about the issue — I have too.

So far, I have yet to hear anything back other than they’re looking into it. But one man did hear something back about the issue — from Steve Jobs himself.

C.K. Sample emailed Jobs earlier this afternoon about the issue. A few hours later, Jobs responded with the following:

Gripping any phone will result in some attenuation of its antenna performance, with certain places being worse than others depending on the placement of the antennas. This is a fact of life for every wireless phone. If you ever experience this on your iPhone 4, avoid gripping it in the lower left corner in a way that covers both sides of the black strip in the metal band, or simply use one of many available cases.

The first part of his statement is likely true, but the thing is, Apple specifically manufactured this version of the iPhone to have an antenna that wraps around the entire body of the device. Most devices, obviously, don’t do this. Apple undoubtedly did this with good intentions — to both improve reception and make the device itself more compact. But is it possible they miscalculated the trade-off?

Jobs’ solution to hold the phone differently is a bit unreasonable. His other solution to buy one of the new cases is, sadly, expensive (each one costs $29). If the problem is as widespread as some are making it seem, perhaps Apple should be giving these bumpers away.

Sample also let me know that Jobs actually just sent the exact same email to him again. This may mean he’s sending this to all the people who emailed him about this issue today.

Despite the busy launch day, Jobs is clearly going through his email. Earlier, he responded to someone about the new FaceTime feature replacing the Hold button on the phone.

Update: Sure enough, the statement Jobs emailed out is the official statement Apple is now using. Also check out the one-liner Jobs sent to another user that Engadget obtained:

Just avoid holding it that way.

Best “that’s what she said” ever?