If you have an iPhone 4, you’ve probably had this problem: you really want to use FaceTime, but there are simply not a lot of opportunities to use it. Sure, one problem is that both parties need an iPhone 4 currently. But perhaps even more annoying is that you have no way of knowing which of your friends with iPhone 4s are actually connected to WiFi so they can use FaceTime. That’s where a new app, FacePlant, comes in.

FacePlant is a third-party application that shows you which of your friends is available to have FaceTime calls with you. The app integrates with your contact list on your iPhone so you simply load it up and it will display which of your friends both have iPhone 4 and are connect to WiFi to make FaceTime calls. It’s an idea that’s so obvious that it’s hard to believe Apple didn’t think of this.

Obviously, there’s one big catch to this: both you and your friends have to have FacePlant installed and running. Luckily, FacePlant takes full advantage of iOS 4 to be able to run in the background. So you can open it and forget about it. If a friend wants to FaceTime with you, you’ll simply be pinged just as you normally would for a FaceTime call.

And yes, there’s a privacy mode which you can enter if you don’t want to be bothered at certain times with FaceTime requests.

Again, this idea seems so obvious that it’s a little hard to fathom that Apple didn’t think of this. And I wouldn’t be surprised if they do eventually do some kind of status indicator along these lines. But for now, FacePlant is the way to go — assuming Apple approves it, of course.

Founder Sol Lipman says the app is currently in the review process, but doesn’t expect any issues to get in the way of its approval. If it does get approved, you can be sure Apple is going to want to promote this one to tout FaceTime even more than they already have.

The app will be a free download in the App Store. Lipman says the plan to make money will come farther down the road with some premium features that users will be able to purchase.

Below, watch a video I shot with Lipman talking about the app. 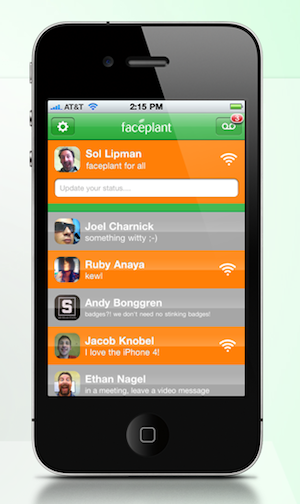 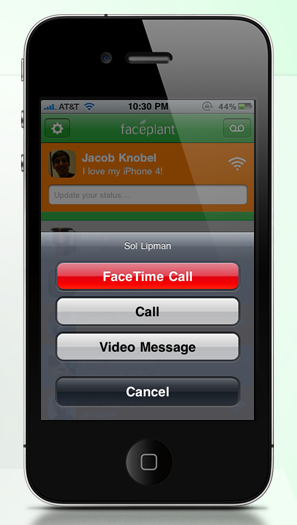