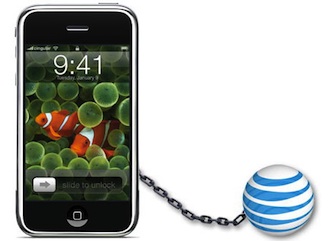 Perhaps now you’ve read Fred Vogelstein’s feature about the relationship between AT&T and Apple in this month’s Wired magazine. If not, you definitely should, it’s available online. It reads a bit like a story about a couple who after three tumultuous years of marriage are about to split up. Not get divorced, mind you, but separated.

In this scenario as laid out by Vogelstein, Apple seems a bit like the uncaring and demanding husband. While AT&T is the timid and overwhelmed wife. The way Vogelstein ends up painting it, it’s hard not to feel a bit bad for AT&T. Their situation has always been sort of a lose-lose. And it could be a very big loss when the iPhone exclusivity ends.

But let’s not feel too bad for AT&T. As noted in Vogelstein’s post, since early 2007 when the iPhone was first announced, AT&T’s wireless revenue is up 43 percent. Meanwhile, the number of subscribers are up about 40 percent. But much crazier is that profit has risen roughly 200 percent.

Yes, AT&T is spending a lot on network upgrades. But every carrier does this (Verizon has spent about $20 billion in the past three years, for example). And AT&T would be even if they didn’t have the iPhone. Are they spending more because of the data demands of the iPhone? No doubt. But as one chart in the story shows, AT&T is actually spending far less than they did in 2008 on network upgrades. This is despite income rising each year — and data usage rising each year.

It may be hard to fault AT&T for wanting to squeeze out more profit. But by not pouring every dime that they can into upgrading their network, they’re sealing their own fate when it comes time for the iPhone to move on.

And you can argue that no matter what AT&T does, it won’t be enough (that’s at least part of what Vogelstein is saying). But if that’s the case, AT&T should have been smart enough to know that for the long-term betterment of the company, it may have been wise to get out of the iPhone exclusivity agreement earlier. Instead, all indications have been that they’ve lobbied hard to keep that agreement in place. And despite Apple thinking about walking away at least “a half dozen times” that hasn’t happened.

Meanwhile, AT&T has shown their overall customer service to be far less than adequate. I keep going back to this example — but it’s a good one. When Netflix has a hiccup in movie streaming, even just for a few minutes, I automatically get an email alerting me that I can have a partial refund if I want it. When I drop a call on AT&T what do I get? Another dropped call if I try to call customer support.

I’ve never once gotten any money taken off of my bill from AT&T despite every single one of those months being filled with dropped calls and overall shit service. If I called to complain I might be able to get something back — but I’d have to do that each month. And even if I didn’t drop the call when calling them up, have you ever tried calling one of those customer support numbers? Kill me.

And I loved when AT&T tried to spin their recent termination of unlimited data plans as a good thing for customers. Almost all customers will be paying less under the new plans, is how the company line read. Sure, right now. But in a couple years (when you’re still under contract, by the way), these plans are going to screw you. This is all about AT&T taking precautionary measures so they can make more money down the road.

It’s not about saving their customers any money. It’s a lucky side-effect of their larger agenda to get data consumption under control. It’s total bullshit.

Vogelstein’s takeaway seems to be that all customers should get used to high prices and declining service as wireless demands continue to increase. Sadly, that’s probably true. As he notes, AT&T has been relegated to a “parsimonious gatekeeper.” And the other U.S. carriers are likely to join them there. Apple (and Google) have effectively body-slammed them and changed the entire wireless industry by deflating their positions of power. But the carriers still control the pipes and unless the wireless industry truly changes with the upcoming opening of the Spectrum (which is mainly thanks to companies like Google — and against the wishes of the carriers), we’re all going to be paying the price — literally.

But at least it seems more likely than ever that sometime soon — either the end of this year or the beginning of next year — iPhone users in the United States are going to have a choice of which carrier to sell their soul to. If nothing else, the Wired story shows that the dysfunctional relationship between Apple and AT&T can’t continue forever. Or probably even much longer. The two would kill one another.

Instead, they’ll date other people. And they’ll share custody of their little girl, the iPhone. Though I still suspect she may get along better with her new mother, Verizon.