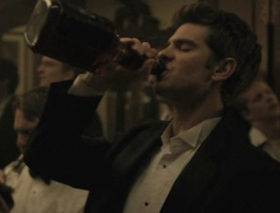 By now everyone has seen the first official trailer for the Facebook movie. While there’s no question that there’s a lot of talent behind it, I’m actually quite surprised that it looks good. But that’s just my opinion. What does someone portrayed in the movie actually think of it? Facebook co-founder Dustin Moskovitz has weighed in on Quora.

Perhaps not surprisingly, Moskovitz takes some exception to what was included in the movie versus what was left out. For example, he’s never even met the Winklevoss twins, who play heavily in the film’s plot. Instead, Moskovitz wishes the filmmakers would have included more of of the other people in each co-founders’ lives that supported them at the time. Yes, there’s a reason Moskovitz made Facebook and not movies.

He also calls it “cool to see a dramatization of history.” But his money quote is this:

A lot of exciting things happened in 2004, but mostly we just worked a lot and stressed out about things; the version in the trailer seems a lot more exciting, so I’m just going to choose to remember that we drank ourselves silly and had a lot of sex with coeds.

Moskovitz makes it seem as if he’s read both the book and the script of the film and takes exception to the attacks on CEO Mark Zuckerberg. Still, he thinks the trailer actually shows some of Zuckerberg’s more positive qualities.

“At the end of the day, they cannot help but portray him as the driven, forward-thinking genius that he is,” Moskovitz concludes. “And the Ad Board *does* owe him some recognition, dammit,” he jokes (a reference to the end of the trailer).