AndroLib, the website that enables you to browse and discover apps for your Android phone far better than the Android Market site does, has gotten a makeover and a bunch of new features today. Sure, it’s still not going to win any web design contests any time soon, but the revamp makes the site a ton more useful as far as I’m concerned.

Granted, Google is probably the only company that can really put the right number on the number of apps downloaded so far, but AndroLib lead developer Nicolas Sorel tells me his method of calculating the estimated total is based on a lot of data and complex algorithms that are capable of adjusting the number (which is updated in real time on the top of the AndroLib website) in near real-time.

Sorel acknowledges that there’s always an error margin with these methods of extrapolation, but says his estimates shouldn’t be too far off – his own Android app was downloaded 3,321,826 to date, while his system estimated approximately 3,270,000 downloads.

Anyway, the new version of AndroLib comes with advanced search, enabling you to find Android apps by keywords, category, pricing, minimum rating and estimated number of downloads. Now, when you’re looking at apps on the website, you can see which other apps you might like based on your apparent interests.

Also new is a scoreboard, enabling you to filter your search based on these criteria: Most Rated Apps, Most Rated Developers, Top Developer Ratings and Top Developer Downloads. There’s now also a video section on the site.

Finally, Android developers will shortly be given the opportunity to customize their application pages and company page, as well as access advanced statistics tailored to their needs. 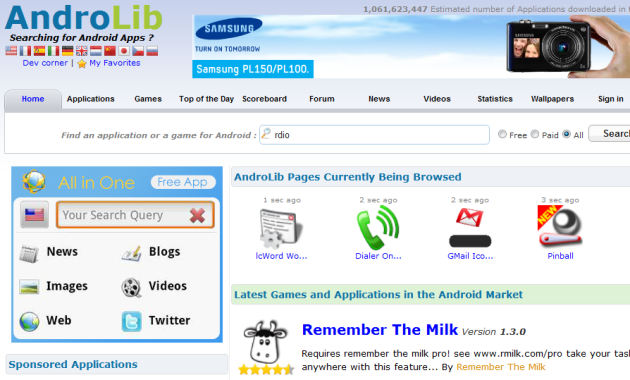