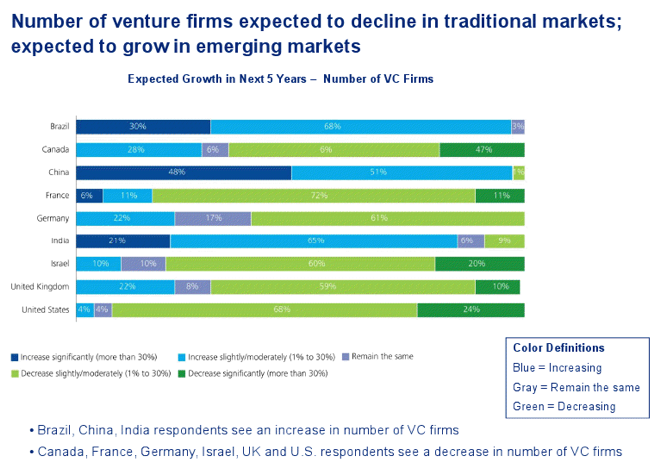 Deloitte and the National Venture Capital Association have released a report today indicating that U.S. venture capitalists expect their market to contract but anticipate growth in emerging markets, including China, India and Brazil, over the next five years. The 2010 global venture report surveyed over 500 VCs worldwide.

According to the survey results, more than 90 percent of U.S. survey respondents, as well as VCs in Europe and Canada, expect the number of venture firms to decrease between now and 2015, while a majority of venture capitalists in China, India and Brazil anticipate adding more venture firms in their respective countries during the same time frame.

U.S. VCs have a depressed view of the industry thanks to a weak IPO market and unfavorable tax and regulatory policies. More than half the U.S. respondents also believe that limited partners will be less inclined to invest in U.S. venture capital funds in the next five years.

On the other hand, 99 percent of respondents in China expect the number of venture capital firms to increase in their country, followed by Brazil (97 percent) and India (85 percent).

In terms of VC fundraising, 56 percent of U.S. respondents believe that limited partners will be less inclined to invest in U.S. venture capital. However, venture capitalists in Brazil (92 percent), China (91 percent) and India (76 percent) all believe limited partners will be more inclined to invest in their respective countries.

Despite the confidence of respondents in VC markets in emerging markets, only 34 percent of all respondents expect to increase their investment activity outside their own country. The countries with the most interest in cross border investing include: France (56 percent), Israel (50 percent) and the United Kingdom (49 percent). Countries indicating the least interest in outside investing were Brazil (19 percent), India (15 percent) and China (11 percent).

Despite concerns over contracting industries in the U.S. and Europe, 57 percent of all respondents believe the quantity of deal flow will increase over the next five years and 56 percent expect the quality to improve as well.

The attitude of the respondents is clearly negative when it comes to U.S. markets. While VC fundraising is up this year after last year’s recession, returns have continued to decline over the past ten years. And clearly growth and opportunity are overseas. This year, the venture industry’s biggest close came from Sequoia Capital’s Sequoia China Foreign Currency Fund III fund which secured $1 billion its early-stage fund during the first half of the year. While these recent findings are somewhat depressing, the hope is that long term returns will eventually increase in the next five years.