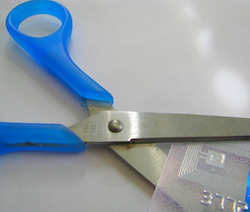 As you may have noticed, Twitter has been having a rough month. Due in part to traffic from the World Cup, Twitter has had its worst month in terms of uptime in a year. The Fail Whale has been out in full force, and it’s partially Twitter’s own fault as they’re trying to overhaul their internal network during this time of high traffic. And today they’ve announced another move to help deal with network strain: an API rate limit cut.

And this isn’t a minor rate limit cut either. Twitter is taking the default limit from 350 and cutting it to 175. And they’re slashing the rates in half across the board. This means that everyone from the smallest Twitter sites to those whitelisted will be affected. Even Twitter’s own mobile properties (which use the same API) are being forced to deal with this cut.

“To ensure fairness to all users of the API, the reduced rate limit is proportional to that application or users’ allowance rather than a fixed value of requests,” Twitter notes on its FAQ site for the cut.

“Reducing the API rate-limit is not the first or only method we use and is one we try to avoid if possible. However, it is also one of the more effective ways to reduce load and ensure that the Twitter service remains available to the greatest number of users,” Twitter developer advocate Matt Harris writes in the Twitter Development Tool Google Group today.

And 175 isn’t as low as Twitter may need to go at time. For example, earlier today Twitter slashed the rate all the way down to 75, and started slashing features such as integrated search. It was re-established a few hours later, but Harris warns that developers can expect more of that in the coming weeks — and these downgrades can happen without notice as Twitter attempts to maintain service availability.

The number of people this change will affect is pretty staggering. “The API represents approximately 75% of the traffic that comes to twitter.com,” Twitter notes.

Update: And just to be clear, the limit is only on tweet read requests — there is no limit on tweets sent.