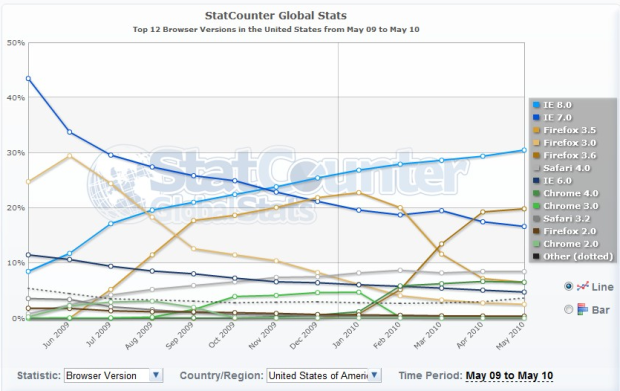 Microsoft’s oft-lamented browser, Internet Explorer 6, may finally be put to rest. This will make many a Web developer happy – but also Microsoft itself.

Firefox 3.6 comes in second in terms of browser usage in the US, with almost 19.85%, while Google Chrome 4.0 only has some 6.5% of market share according to StatCounter.

Update: Results from Net Applications paint a similar picture, although different numbers: the firm has Internet Explorer’s overall share dropping to below 60 percent from 67 percent and Firefox at the 24 percent mark, up 2 percent from the same period last year. NetMarketShare has Chrome’s usage at 7 percent in May, up from 3 percent a year ago.

Still according to Net Applications, Internet Explorer 8’s share in May surpassed 31% among Windows customers, the only OS on which Internet Explorer is available, and 28.94% share across all operating systems.

But the reason Internet Explorer 6 is still around in the first place is likely because of some large corporations still clinging on to it despite massive security issues with the ancient browser. StatCounter also adds that Africa and Asia, where IE6 still has 20.8% usage, are making it harder to kill support for the browser already.

Hopefully, everyone will soon see the light.

(StatCounter says the data is based on an analysis of 15 billion page views – 3.8 billion from the US and 4.3 billion from Europe – for May 2010 collected from a network of over three million websites.)