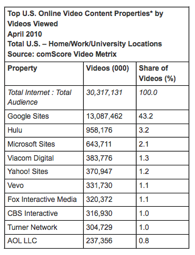 The U.S. comScore video metrix stats are out today, with the number of video viewers dipping slightly during the month of April. According to the web metrics company, 178 million U.S. Internet users watched online video during the month compared to 180 million in March. Vevo, the Hulu for music videos which launched last December, saw swift growth, attracting 43.6 million viewers in April, representing a quarter of the U.S. online video audience. Of course, this includes views on YouTube, which I suspect accounts for much of Vevo’s viewers. And 83.5 percent of the total U.S. Internet audience viewed online video. 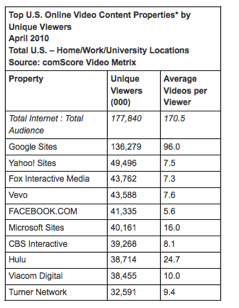