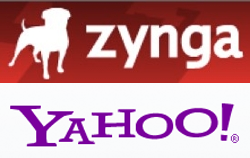 If you thought Zynga’s recent peace treaty with Facebook meant the end of its efforts to expand its reach beyond the social network, think again. Today, Zynga has announced that it has forged a deal with Yahoo to feature its games throughout Yahoo’s network — a move that will put Zynga’s games in front of Yahoo’s 600 million users.

At this point details on the deal are a bit vague — the games aren’t rolling out onto Yahoo for a couple of months, and neither company has announced which games will be integrated. That said, we can likely expect Zynga megahits like Farmville to be featured prominently, perhaps even on the Yahoo Homepage (which would be a huge win for Zynga). Yahoo also says that games and/or updates will be available through many of its properties, including the Yahoo Games portal, Yahoo Mail, and Yahoo Messenger. Games will be deployed in the US first, followed by a global rollout.

All of this comes just a week after Zynga agreed to enter into a five-year partnership with Facebook to continue its presence on the social network, after tensions between the companies almost led to war. Details of the deal weren’t disclosed, but we’ve heard rumors that Facebook was pushing to keep exclusivity over Zynga’s games, which obviously hasn’t happened.

This isn’t the first time Zynga has expanded beyond Facebook. Last fall it launched a Facebook Connect-enabled version of Farmville at Farmville.com, and it integrated its games into MSN Games back in February. And there’s also Zynga’s rumored independent game portal Zynga Live looming in the future.

It’s also worth pointing out that today’s announcement is coinciding with Yahoo’s Investor Day, and will probably be pitched as part of its recent drive to increase its social functionality.

Update: I spoke with Cody Simms, Yahoo’s Senior Director of Product/UED for Yahoo! Social Platforms, about the news. When I asked if Zynga games would be featured prominently on the Yahoo Homepage, Simms said that details are still being worked out, but that it would be to the benefit of both companies to have users playing Zynga games on Yahoo. In other words, don’t expect these games to be buried under a hard-to-find menu.

Simms also explained how notifications from the Zynga games will be integrated deeply into Yahoo’s suite of services, allowing users to receive updates directly from Yahoo’s web apps and Messenger client. As detailed in the Yahoo Developer Blog:

Both the Social APIs and YAP will also allow them to easily tap into Yahoo! user identities (including the aggregated identities we’re enabling across our network), share to Yahoo! Updates, and automatically leverage these new notification channels. (We’ll be providing more details on these new notification channels soon — and they, like so many of our products, will be open for all.)

With these integrations, users who enjoy Zynga games will now have the ability to use their Yahoo! ID and access Zynga’s top titles across Yahoo!’s many products — including Yahoo! Homepage, Yahoo! Toolbar, My Yahoo!, Yahoo! Games, Yahoo! Profiles, and Yahoo! Messenger. YDN is proud to provide the infrastructure enabling these experiences to seamlessly plug into these products.