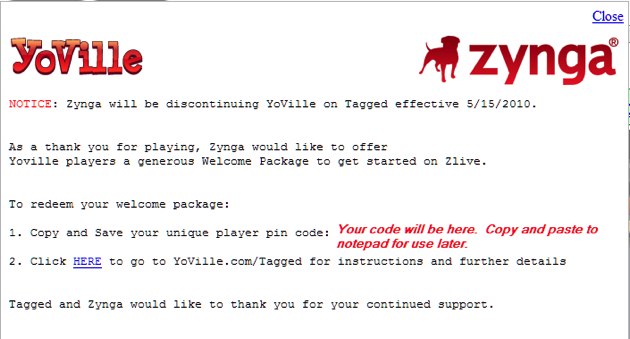 Yesterday we reported on Zynga’s plans to launch a social gaming network called Zynga Live as part of its efforts to distance itself from Facebook.

Zynga is also pulling away from other social networks, it seems, including Tagged. They announced the imminent shutdown of YoVille on Tagged earlier this week, and announced plans to let users play the game directly on YoVille.com shortly. Zynga has also launched Farmville.com independently, last year, but its other games remain siloed in other social networks.

In the initial notice, Zynga told players “As a thank you for playing, Zynga would like to offer Yoville players a generous Welcome Package to get started on Zlive.” That was the first time, as far as we can tell, that Zynga publicly stated that there would be a Zlive site. Zlive.com isn’t currently resolving.

A blog post by Zynga announcing the change was later updated to remove the references to Zlive.