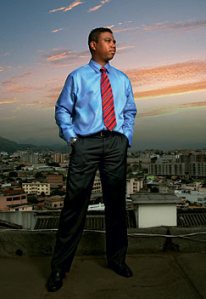 I wrote before that Wall Street has a far bigger fascination with Brazil than Silicon Valley has. But since I got back from Brazil two weeks ago, I’ve had several conversations with Silicon Valley-based investors mulling scouting trips down South. Indeed, I’ve heard that at least one company I wrote about from my last trip to Brazil is deep in some funding negotiations as we speak.

If the left side of the coast of the US is getting serious about doing business in Brazil, there’s someone they need to meet: Edivan Costa. He’s taken one of the biggest threats to Brazilian entrepreneurship, and fittingly, turned it into a startup itself.

Sure Brazil is a growing market, but it’s not easy to build a company there. The government takes one-third of revenues in taxes, and Brazil has European-like labor laws that prevent companies from flexibly hiring and firing—a big negative for a startup ecosystem. But Costa’s company SEDI is helping with one big hurdle new companies face: Bureaucracy. On average, it takes 150 days to open a business in Brazil, requiring dozens of licenses and in many cases those licenses have to be continually renewed. SEDI specializes in making that painless, and Costa has spent 18 years learning how to get the process down to 30-to-40 days—without paying any bribes. He has 90 employees in twelve branches in Brazil.

It’s one thing to start a business in an area other people are ignoring. It’s quite another to start a business out of something everyone else sees as the exact thing that’s thwarting entrepreneurship. Costa always had that entrepreneurial edge—growing up in Rio’s favelas he spent his youth collecting scrap paper and selling it to recyclers to pay for his school books. He thought he’d found his way out through every Brazilian kid’s dream—professional soccer. By the time he was 18, he was playing in the equivalent of the minor leagues in Sao Paulo, when his father fell ill and he had to move back home. He wound up splitting some office space with an attorney, doing his clerk work and eventually started offering that service to other attorneys and companies.

Costa’s story is remarkable for a guy that grew up with few advantages. He was largely uneducated, had no investors and as an Afro-Brazilian he takes issue with the idea that Brazil is free from racism. Soon after starting SEDI, he was driving a nice car with a blond girlfriend on his arm, and a guy in a convenience store asked him if he was a Samba player, a soccer player or a criminal. He says he still gets confused for a security guard in malls, because he wears a suit everywhere he goes. (That’s him in the dramatic picture above.)

But the only color that Costa’s clients care about is the red tape he helps them cut through, by keeping up to date with the myriad of changing regulations. Customers include WalMart, TelMex and Carrefour, along with a lot of other big national brands. He specializes in retail businesses with hundreds of stores spread throughout the country. SEDI did over $3 million US dollars in revenue last year, down from 2008 thanks to the financial crisis. But already in 2010, business is up 25%, Costa says. He serves about 8% of the top 500 companies in Brazil, so there’s clearly a lot of room to grow– or if he’s not careful for a competitor to eat his lunch.

SEDI is a services business that likely won’t be the next big Brazilian IPO. But it could easily enable that company to open its doors. People always say the key to Silicon Valley’s startup infrastructure is the network of professionals skilled at getting a company up and running in a matter of days. Brazil still has a long way to go to get there, clearly, but SEDI helps. This seems like a no-brainer service every emerging market needs.