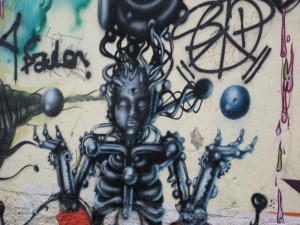 I just got back from a few weeks in Brazil. It was one of my last research trips for my upcoming book on entrepreneurship in emerging markets. During my last trip to the country, I wrote about the preponderance of finance multinationals and innovation percolating in Sao Paulo and suggested it could be a hub for future financial innovation. Another big category that jumped out at me on this trip: Advertising.

Most big advertising companies have a creative bureau in Brazil for a reason: Brazilians are just good at advertising. They are creative: I went on a graffiti tour of Sao Paulo and saw some of the most amazing, detailed, expressive, wacky stuff I’ve ever seen, building-sized and most of it will be painted over and replaced by my next trip. (Photo above one of hundreds snapped on that tour.) They are emotional: One entrepreneur told me when he went to soccer games, he didn’t care if his team won or lost, he just wanted the emotional release either way. They are expressive: Have you seen footage from Carnival? Brazilians spend a year erecting massive floats that are used once, then destroyed.

As the younger generation of Brazilians are increasingly enthralled with starting companies, some of that talent is peeling off and starting new advertising businesses. Some of these are aimed at technology and tools, some have more of an agency or services model that may not scale. But the interesting thing is the companies are being started from the point of view of advertising professionals, not technologists or content creators like you see in much of the rest of the start-up world.

That sentence is likely to make any Web 2.0 companies reading this groan. Over the last few years, as Web 2.0 companies have gotten to critical mass and shifted an eye towards making money, the Valley and Madison Avenue have been trapped in a monetization dance where the “25-year-old-media-buyer” is public enemy number one. He’s the bottleneck between big clients who want to expand their reach with novel campaigns and the sites that have the eyeballs.

Might this new startup generation of advertising kids in Brazil find an answer? Way too early to tell. But two things are certain. First, we’re trapped between an advertising world that tech has wrecked and a yet-unrealized world where tech offers the new advertising answer. (Paid search alone isn’t it.) And second, there’s a bunch of raw talent in Brazil and that talent is starting advertising companies that are good at exploiting holes in the market. Even a few modest exits could ignite an explosion of advertising innovation.

I met about a dozen companies that fit this trend, but here are two that are worth watching, one on the non-Web front and the other following the more traditional Web 2.0 ad network path. Plenty more are bubbling up where these two came from.

Biruta: Sheer Creative Crazy. I did not expect to like this company. But when I showed up to the three-story, house-like office building in the hills of Rio and most of the company was practicing a flash mob out by the pool, it felt very Silicon Valley 2007. You remember: That period when offices did group lip-dubs and everyone was excited and hopeful, creating new stuff.

Not that Biruta hasn’t created a real company—it gets paid by agencies to produce what they call “crackpot marketing” campaigns for a lot of big companies like Claro, Nike and Petrobras. Things like organizing huge singles marches through major cities and projecting videos on water. When Sao Paulo banned outdoor media, Biruta cleverly got around it by projecting billboards on walls, growing its business while an overall market shrank.

They remind me of an Ideo for marketing: It’s not just on one odd-ball campaign, they have a track-record and system for coming up with these things over-and-over again. And with the World Cup and the Olympics both coming to Rio, these guys will have a lot of opportunity to market domestic and international brands to tourists in creative ways.

The company was started by Alan James, who grew up in one of the poorest areas of Rio and dropped out of high school working odd jobs to survive. He started his advertising career in 1997 by stringing banners to the back of a plane. How’s that for old school banner ads? He grabbed attention by creating more outrageous banners like three-dimensional Coke cans that would inflate as he flew.

James moved the company into a Shell-sponsored incubator started to help develop entrepreneurship in poorer areas of Rio, but because the rooms were all taken he started it in a bathroom. (They’ve since taken over the building and formally turned that bathroom into more office space.)

There is something about James and about this company. Despite a preference for product companies, Biruta was overwhelmingly approved at Endeavor’s International Selection Panel in Rio last week. In a sign of good marketing, the founders—who only speak Portuguese—wowed the international group of judges with a video about their history and work. “This isn’t a services company, this is an innovation company,” declared one judge, Diego Piacentini of Amazon. (Watch the video below.)

Boo-box: Brazil’s Web 2.0 Ad Network. When Boo-box was first covered on TechCrunch it was called easy acquisition fodder for its novel ecommerce ad unit that allowed you to easily buy, say, shoes mentioned in a blog post. That acquisition didn’t happen, but the company did raise funding after that post and has continued to grow since.

Boo-box’s founder Marco Gomes lead the interactive team at AgenciaClick before starting the company in 2007. His simple belief is that everyone producing content online should be able to make money from it. Boo-box still sells that original ecommerce ad unit, traditional IAB ad units and experiments with other social media ad units too. A lot of them—like advertising to your Twitter followers— aren’t particularly unique from US companies, but Boo-box focuses on treating its publishers better than other ad networks, as such it has a network of hundreds of sites and 500 million page views a month in a huge country most ad networks have ignored. And the 20-something Gomes—who also came from a slum— has emerged as sort of a role-model for Web kids in Brazil.

Boo-box is it’s one of those rare companies in an emerging market that seems to have a lot of the right elements in place: The timing is right with an established global market and no local player. They’ve got funding from the guy many call the best local Web investor Eric Acher of Monashees Capital. Gomes is the visionary techy and his partner, Marcos Tanaka, is a bare-bones, get-things-done execution guy who previously worked for big consulting firms organizing Brazilian campaigns for huge multinationals like Coca Cola. Maybe the company is still just acquisition fodder, but it’s more than just an innovative ad unit now.