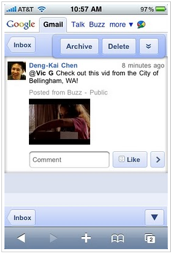 Even though Google’s Buzz has drawn criticism for privacy issues, and has been deemed an overall frustrating experience, Google is not giving up on Buzz altogether. Google just adjusted its settings for Buzz, and today, the search giant is integrating Buzz into its latest version of Gmail For Mobile.

Since the communication tool’s launch, you could access Buzz via Buzz.Google.com on your mobile phone. And if your inbox integration was set to a specific setting, your @replies and comments would be sent to your Gmail inbox. The new integration just allows you to play with Buzz from within the mobile version of Gmail.

A few weeks ago, Google launched an Android widget for Buzz that would allows users to post text or photos to the service without having to launch any app on the device.