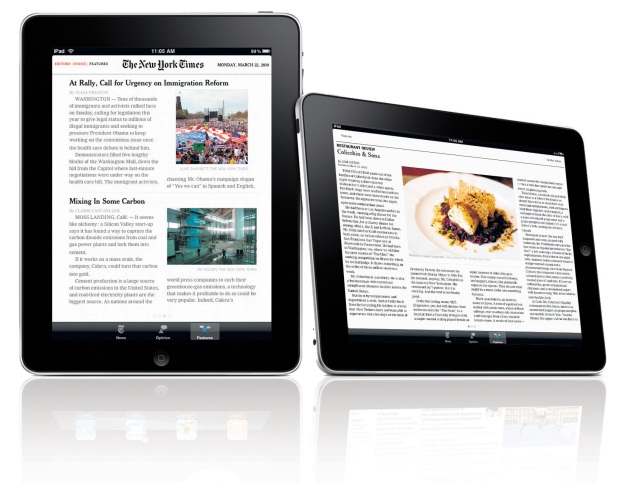 We had some fun yesterday for April Fools day, fake-covering the launch of the New York Times iPad app by replacing some words of an article in the paper published back in 1996 upon the launch of its first Website.

Now, the company has introduced its iPad app for real. It’s free and both advertiser-sponsored and advertising-supported, but there’s also a “full, paid app” in the works.

Screenshots of the app had already surfaced yesterday, first on MacStories.

The iPad application is dubbed The New York Times Editors’ Choice app (iTunes link) and offers a selection of news, opinion and feature articles chosen by Times editors that can be downloaded automatically to the tablet device. It delivers two pages of content with the top eight to ten articles in latest news, business, technology, opinion and feature sections with accompanying videos and photo slideshows.

The app is free of charge, but the launch was sponsored exclusively by Chase Sapphire and Medialets took care of the advertising part of the equation: a full-page vertical and horizontal interstitial ad.

Features of the application include (straight from the press release):

Offline reading – download and sync articles and images to iPad device for viewing offline or in airplane mode.

Share options – e-mail articles to friends from the app.

Interestingly, The Times said there’s also a paid app forthcoming, but wouldn’t detail the price or what people would be paying for exactly.

Presumably, the paid iPad app will let people access the full array of digital content the NYT has to offer rather than only articles hand-picked by its editors. A lot will depend on the price, but I assume the paid app won’t come with advertising.

Would you pay for a NYT app if you had an iPad? How much would you say is too much?