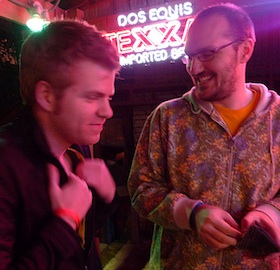 I couldn’t squeeze maybe the most impressive stat in the headline: SimpleGeo is closing in on one terabyte of geodata stored. Needless to say, they’re growing fast.

To help with that growth, the location infrastructure company (which helps other companies easily implement location)  has added five new employees to their workforce. They are:

The five new employee brings SimpleGeo’s total up to 13. In fact, they’re getting so big, that they’ve decided to open another office. They’re currently scouting locations (they should have some good data to do that) to open a new branch in San Francisco, to go along with their headquarters in Boulder, CO. Considering many of these new employees are SF-based (as is previous recent hire Mike Malone), and given how many location-centric events are happening around the city in the coming months, this makes sense.

While SimpleGeo is currently still in closed beta testing, they plan to open to the public in the coming weeks, co-founder Matt Galligan tells us. Given the amount of interest surrounding location-based services right now, the timing seems perfect. Location was the talk of SXSW this year, and SimpleGeo had maybe the coolest way to visualize it, with Vicarious.ly, which showed various location data around Austin, TX (such as Foursquare and Gowalla check-ins) in realtime. The plan is to launch Vicarious.ly for other cities as well, to show off the data SimpleGeo is collecting. The service also announced a partnership with Skyhook Wireless to give them even more massive amounts of geodata.

[interestingly enough, the picture of SimpleGeo co-founders Galligan and Joe Stump was taken a year ago by Andrew Mager — it all comes around]