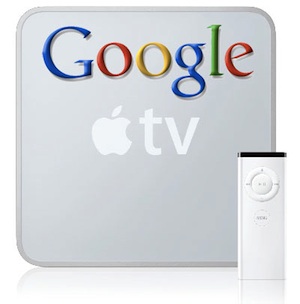 For the past couple of years now, when talking about the Apple TV product, Apple likes to throw out the word “hobby.” It’s as if they’re ashamed of the device. And considering sales are anemic next to Macs, iPods, and iPhones, it’s no big surprise that they talk this way.

But there’s actually nothing to be ashamed of. The Apple TV is a good product. Apple just needs to put some proper time and energy into it, to expand it to its full potential. And news today about the so-called “Google TV” should do just the trick.

Apple and Google are on the verge of war. The formerly close allies are increasingly competing in key spaces for both, and the living room is likely to be a new battleground because it’s still very much up in air. As the New York Times reported yesterday, Google is working with partners including Intel, Sony, and Logitech to bring a Google TV experience into the living room. This is, of course, where the Apple TV resides. And Apple would be foolish to simply cede any ground it does have to its new favorite rival just because it’s focused on other things (*cough* iPad *cough*).

As Nick Bilton points out, this Google TV would be based around the Android platform. This means that the key idea is likely to have third-party developers work on it to make applications built for a television set. That’s easier said than done, but Android’s open nature should yield some interesting results rather quickly.

Apple, meanwhile, is of course anything but open with regard to their devices. In fact, the Apple TV is entirely closed right now, as only Apple is able to modify its software (without hacking it, of course). I suspect that will change, following this revelation.

The idea of running iPhone-style applications on the Apple TV has long been a sexy one. Hell, people have even ported apps over to a TV screen to show how well it could work. The main problem with developing iPhone apps for the Apple TV seems to be resolution. With the iPhone (and iPod touch), Apple offers only one screen size/resolution, ensuring developers have an easy time making great-looking apps — while at the same time, making sure end users have a great experience.

But the iPad has already changed everything. With their new device, Apple has kept things as simple as possible by making iPhone apps scale up two times to work on the bigger display, but it’s still shows a willingness to move beyond the one screen size. Unfortunately, with the Apple TV, it can be attached to a screen that could be a huge variety of sizes, so it would be hard to control that.

Google doesn’t care about that because Android already runs on dozens of phones with different screen sizes. But Apple clearly cares about how apps look on its devices (so much so that the iPad itself was likely designed at a strange ratio simply to make scaling apps look as good as possible). So does that mean they start offering an actual Apple TV (as in a screen)? Rumors of that have been around for a long time. Or maybe they black-box apps to a certain resolution — similar to what they’re doing on the iPad when an app isn’t scaled up?

Who knows. But what I do know is that upon hearing this Google TV news, the Apple TV became a little less of a “hobby” yesterday.

Aside from calling it a hobby, Steve Jobs has referred to the Apple TV as being a potential “fourth leg” of a chair Apple is building. Leg one is the Mac, leg two is the iPod, leg three is the iPhone, and Jobs had hoped the Apple TV would complete the chair one day. But it seems clear now that he thinks the iPad could be the fourth leg instead.

Screw that. I think it’s time for Apple to build a whole dining room set of furniture. We, as consumers, need a living room arms race between Apple and Google (and Microsoft, TiVo, Roku, Boxee, and the rest) to kick the cable companies’ shitty television user experience to the curb.