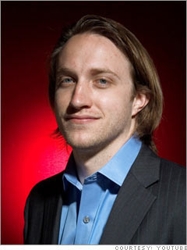 You can learn all sorts of interesting tidbits from legal documents. For instance, in one of the legal briefs unsealed today in the YouTube-Viacom dispute, such as the amount of money YouTube co-founder Chad Hurley made from the $1.65 billion sale of the company to Google in 2006. His take: $334 million (based on the November, 13, 2006 closing price of Google’s stock). In other words, the young CEO owned about 20 percent of YouTube at the time of the sale.

YouTube’s other co-founder Steve Chen’s stake was worth $301 million at the time of the sale, and the third co-founder Jawed Karim walked away with $66 million. Even YouTube interface designer Christina Brodbeck “received Google shares worth $9.09 million.”

Another notable stat from the legal docs: in the past five years, more than 500 million videos have been uploaded to YouTube overall.