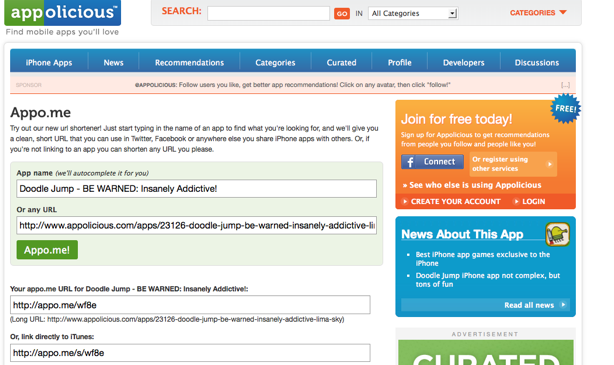 Fresh off the acquisition of AppVee, social mobile app directory Appolicious is releasing a few new features including a Facebook App, an Appo.me URL Shortener for links to apps, and a Twicker ad model, which allows users to view tweets and offers from sponsors on the site. Appolicious, which just raised $1.5 million in funding and debuted an iPhone app, tries to make sense of the 100,000 apps on Apple’s App Store and the 16,000 apps on the Android Market, but with a social twist. So not only can you find apps based on category or topic, but you can share those apps with your social graph on Twitter and Facebook, review apps, and more.

The Appolicious Facebook app allows users to access Appolicious’ recently launched Curated App Lists, which are recommended lists of apps from users based around hobbies and interests. The startup also launched Twicker, an ad format where advertisers send customized messages to the Appolicious audience via Twitter. The Tweets are seen on a ticker at the top of the site’s page. Sponsors pay a monthly fee to advertise via the Twicker.

Additionally, Appolicious is rolling out the Appo.me URL shortner, which gives the ability to easily create, grab and share a shortened URL that links directly to an app. You simple type in the name of an iPhone app and Appo.me automatically completes the app name and will give you a shortened URL for the link to the app in the iTunes store and its landing page on Appolicious’ directory.

Appolicious’ Facebook app will compete with the mPlayit, a Facebook-based mobile app directory. But the feature I find most compelling is the URL shortener, which makes it dead simple to find and link to any app on Apple’s App Store. Founded in May of this year by former Yahoo VP, Alan Warms, Appolicious is hoping to expand its platform to include Blackberry and other smartphone apps. Warms is a serial entrepreneur who sold his startup Buzztracker to Yahoo in 2007.