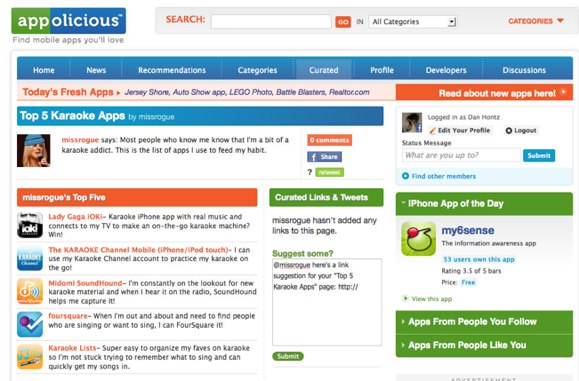 Appolicious, a comprehensive iPhone and Android app directory with a social twist, has launched a compelling new feature today: the ability for users to create curated lists of iPhone apps and Android apps. The new feature, which is similar in some ways to Twitter’s list functionality, allows anyone to create lists of their favorite apps by category and lists are limited to five apps. Appolicious has also launched an iPhone App Developer Directory that aims to connect businesses with app developers.

Appolicious, which just raised $1.5 million in funding and debuted an iPhone app, tries to make sense of the 100,000 apps on Apple’s App Store and the 16,000 apps on the Android Market, but with a social twist. So not only can you find apps based on category or topic, but you can share those apps with your social graph on Twitter and Facebook, review apps, and more. Via its technology, the application will scan your iTunes directory for your downloaded app and will integrate them into your Appolicious library. It’s similar in some ways to oneforty, an app directory for Twitter. The ability to create lists is a sure to be popular amongst users of the platform and could be a useful resource for consumers looking to get both user and expert opinions on apps in certain categories. Curators of lists can list apps, the reason and rationale behind their choice, any related links or tweets, and why they’re qualified to make that selection.

Founded in May of this year by former Yahoo VP, Alan Warms, Appolicious is hoping to expand its platform to include Android, Blackberry and other smartphone apps. Warms is a serial entrepreneur who sold his startup Buzztracker to Yahoo in 2007. Warms is enthusiastic about the new iPhone app business directory, which he hopes will become a defacto resource for businesses, brands, retailers and developers. The directory will launch with several thousand profiles of various app developers.

The startup faces competition from Appsfire, 16 Apps, mPlayit, and others.