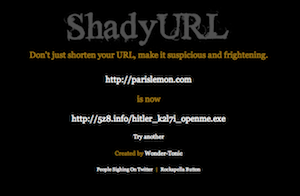 The web has no shortage of URL shorteners. In fact, there are so many that they’re all kind of blending together and I have no idea where to turn beyond the de-facto one Twitter uses, Bit.ly. But today, a new one has piqued my interest.

ShadyURL (made by Wonder-Tonic) is awesome because well, it creates shady URLs. Rather than focusing on making a URL as tiny as possible to spread on a site like Twitter, ShadyURL takes a regular web address and converts it into something that looks as sinister as possible.

One big fear about URL shorteners is that they obfuscate what may well be harmful websites. Some shorteners, like Bit.ly now check out the links and warn you if they point to a malicious site. ShadyURL doesn’t do that. Instead, it takes what may well be a perfectly normal website and wraps it in a URL that looks like it may point to some nefarious region of the web. You know, sex, murder, drugs, viruses. Again, just awesome.