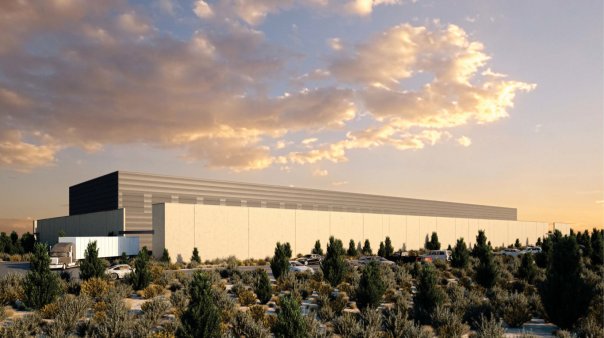 Facebook has 350 million users now and thanks to worldwide growth, shows no signs of letting up. While still technically a startup — though one with around $750 million in funding — its size and traffic puts it in the same league as some of the biggest sites on the web. That’s why it’s pretty incredible that they’ve gotten away without having their own data center. Until now.

The service broke ground on its first data center in Prineville, Oregon, it announced today on its blog. The artists rendering of what the building will look like when done shows a massive facility (that sort of looks like a Playstation 2). Facebook notes that it will be ” highly efficient and cost-effective for our operations today and into the future.”

But why build it in Oregon? Well, a number of large companies choose the state for some of their data centers, including Amazon and Google, despite not being headquartered there. The state offers cheap power, a good climate (read: cooler), and tax incentives for companies to build these centers there.

No word on how much this is costing Facebook, but undoubtedly it will end up being cheaper in the long run then their current strategy of leasing out entire data centers for their needs. And cost-saving on the server side is very important to the company. When the company announced it was cash-flow positive back in September (when it had a mere 300 million users), the milestone was largely attributed to the work they’ve done with technologies such as Haystack, which cut the cost of photo storage on servers for them, as well as other server associated cost savings.

Facebook also has a number of energy-saving techniques it plans to use in this facility. Here are the main ones they note:

Some 200 people will be working to build this data center until its completion in early 2011, The Oregonian notes. Once it’s completed, there will be a staff of about 35 people in the building; mostly technical staff to make sure things are running smoothly.

When a not insignificant percentage of the world is using your product, you want to make sure it stays up. And now Facebook is taking that reliability into its own hands.