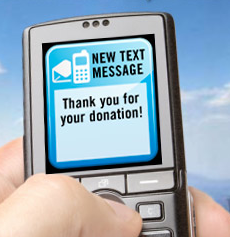 One of the reasons text messaging is so popular is because it’s so simple. Anyone with just about any kind of mobile device can do it. And that’s why it was ingenious when the Obama administration set up a special number and got the major U.S. carriers on board to allow people to very easily donate $10 to the Red Cross to help with the disastrous situation in Haiti following a major earthquake. So far, that program has raised over $5 million from over a half million different mobile phone users, someone from the U.S. State Department confirmed today.

As of the last update, the number stands at $5.2 million. Of that, more than half have apparently come from AT&T users ($2.63 million), the company told us today. If you’re still interested, simply text HAITI to the number 90999. A $10 charge will be attached to your next cellphone bill.

AT&T shared their data today after I reached out over some confusion about whether the company was actually profiting from this fundraiser. Yesterday, in a hurry to get the program going, the service was still charging users for sending this text messages, apparently. But when they realized that, they made them all free, and went back and retroactively removed any charges users may have gotten by texting for the cause. Nice move.

This texting drive, being run through mGive, a non-profit working with the Red Cross, is also leveraging Twitter and Facebook to help get the word out there. Donations are said to be coming in to the tune of $200,000 each hour, so they’re very likely coming close to $6 million raised at this point. Impressive stuff.