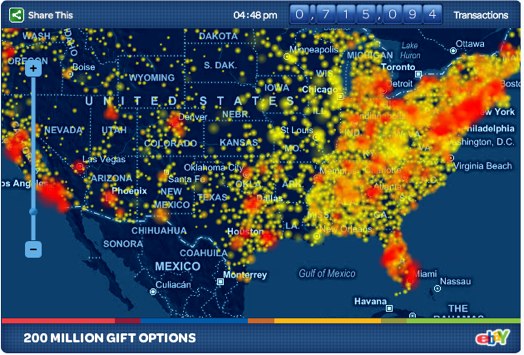 While Black Friday has long been a popular phenomenon for brick and mortar stores, the deal frenzy has been extending to e-retailers and online stores. Now, sales on the web are equally as lucrative as those in the stores. eBay is launching a campaign to capitalize on the holiday shopping season, called “12 Days Of Deals,” and has also rolled out a new Deal-focused iPhone app and partnered with Microsoft to offer deals directly from Internet Explorer 8.

As the clock runs, points will appear on the map, representing the occurrence of buyer and seller transactions on eBay. eBay says the map visualization is based on raw data that includes eBay sales and purchases occurring in approximately 33,000 U.S. ZIP codes.