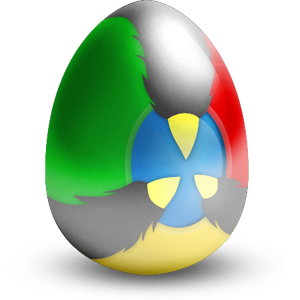 I have something to admit: I’ve never been a big extension guy. When I was still using Firefox, I liked them, but the downside, browser bloat, turned me away. But now that we’re starting to see the first steps of true extension support in Chrome, I think I could be swayed.

While people have been developing extensions for Chrome for a little while now, none were officially supported. But now that Google is reaching out to developers to start making these for real, we’re already hearing about some good ones. One such one was sent to us tonight by Aviary, makers of browser-based creativity tools.

Aviary’s new Chrome extension is simple, but very useful. Once you install it, it adds a little icon to the right side of the URL bar. Clicking on this icon gives you a drop down menu of options. Most give you easy access to Aviary’s suite of tools, but the first option is key. It’s the one that allows you to capture the visible portion of any web page you are on with one click. From there, the image is loaded into whichever Aviary tool you set as the default editor.

So, for example, if I use the Aviary Image Markup tool as my editor, I’ll capture the web page, and be moved into the editor in seconds. From here I can manipulate the screenshot and easily save it to Aviary. More importantly, I can save it to my desktop without having to save it to Aviary at all. This makes for one extremely fast and easy screen capture tool. 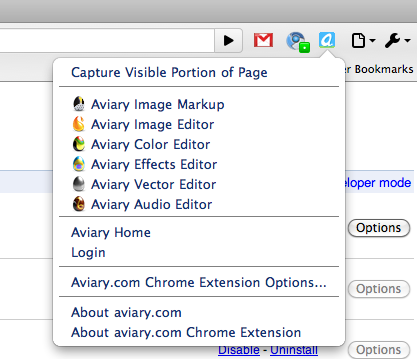 But the best part of Aviary’s extension is that it doesn’t slow down Chrome. While the actual Aviary editor takes up some of your CPU, the extension itself ads no bloat to the regular browsing experience. I actually have three extension installed right now and none are slowing Chrome (Chromium) at all. This gives me great hope.

A few notes about Aviary’s plug-in: First, it’s not available yet only because Google has yet to launch its Extension Gallery. Supposedly, that’s coming soon for end-users but for now extension support is limited to developers being able to upload their creations. Second, the extension works fine in Chrome for Windows (and I believe Linux), but to use it on the Mac you have to be using the latest build of Chromium (the newest dev build of Chrome for Mac doesn’t support it yet).

Aviary also makes a similar extension for Firefox, that has seen over 100,000 installs, we’re told. That version also features two features the Chrome extension doesn’t yet: Full page captures (not just the visible part of the page) and Flash capture support. We’re told both will be coming in an update to the extension.