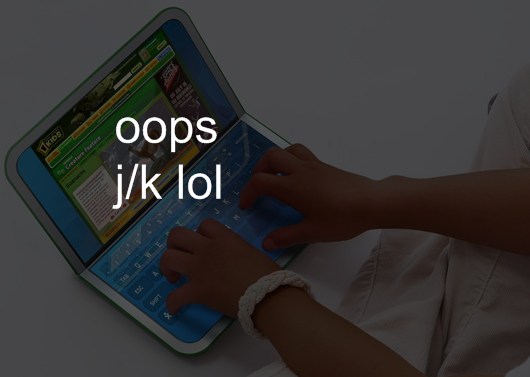 The One Laptop Per Child project has seen mixed success. With competition from similar, but more familiar-looking items from Intel and others, the OLPC found itself suddenly competing in a market it had no intention of entering. But they’re out there, they’ve had some serious orders, and despite some other speed bumps, has certainly lent a hand in increasing computer literacy in the developing world.

You may remember that the sequel to the XO laptop, as the OLPC hardware was actually called, was spied at Davos in January after its initial debut in May of 2008. It was noted at the time that there was some doubt as to whether it would be made, and now those doubts have come to glorious anti-fruition. The XO-2 is dead — but only because Negroponte decided it should be a tablet.

Don’t look at me like that. I know, right? Yet another tablet entering the fray, and this one (claims Negroponte) will only cost $75. Well, that’s it then. Guess we can pack up the CrunchPad (bless its heart) and go home. Apple is probably quaking in its loafers as well, since the same latte-sucking Volvo-jockeys who want the Apple Tablet also love the idea of the OLPC. Charity and all that. Buy one, give one is a great promotion, and for a $75 unit, it’s a price most can afford. Assuming they hit that price target, of which there is no guarantee. On the other hand, Microsoft is probably happy that there’s one less dual-touchscreen device to compete with the Courier.

Here’s what Negroponte had to say about the XO 3.0 in a recent interview with Xconomy:

2.0 has been replaced by two things: 1) model 1.75, same industrial design but an ARM inside, 2) model 3.0, totally different industrial design, more like a sheet of paper… completely plastic and unbreakable, waterproof, 1/4″ thick, full color, reflective and transmissive, no bezel, no holes. 1W. $75, ready in 2012. 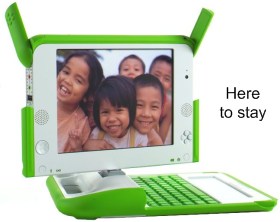 Sounds like a winner! He also notes that the OLPC program is splitting into a hardware arm and grassroots/education arm. The original XO will be updated with a new processor but will continue to ship pretty much as is. They’re also requesting that OLPC be changed to “olpc,” a demand I find onerous (and pointless).

What the device would actually be capable of is anybody’s guess, but a basic e-book reader and browser seems to be the minimum feature set. I’m torn between an affinity for traditional computing (which is probably fundamental to a modern education) and traditional education, which the XO 3.0 would most certainly make easier. As a commenter at Slashdot points out, “in any third-world country access to ‘open source’ text books on any subject at zero extra cost would be more important than the actual “educational computer” functionality.” Text books to be sure, not to mention the world’s literature and current events. The village library just got a lot bigger.

Whatever happens, we can’t expect it before 2012, which really renders discussion moot, seeing as the entire landscape of tech will have changed by then. So I guess the CrunchPad and Apple Tablet aren’t in danger just yet. Hell, we’ll probably be on version 3.0 ourselves by that time. But while the consumer tech market is a moving target, third-world literacy and grassroots education are always welcome. Even though Negroponte has pretty much said that this is a business endeavor and not a charitable one, it may yet do a lot of good.